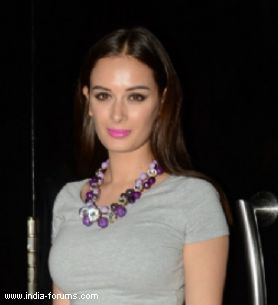 Actress Evelyn Sharma is believed to have turned down a movie offer due to the requirement of 'excessive nudity'.

The actress, who studied in Britain and started her career with an American film, was offered a high intense drama. But even though she may be perceived as bold and sexy, she is not willing to bare it all on screen.

She knows where to draw the line, said a source close to Evelyn, who has featured in films like "From Sydney With Love", "Nautanki Saala!", "Yeh Jawaani Hai Deewani", "Issaq", "Yaariyan" and "Main Tera Hero".

After all this, "a lead role in a high flying British drama would have been quite a meaty addition to her career, but the character was a little too bold for her and after some thought, she decided to give it a pass as it wasn't subtle or suggestive nudity", the source added.

The offer for the yet untitled project is said to have come her way in the beginning of May. She declined the role soon after.