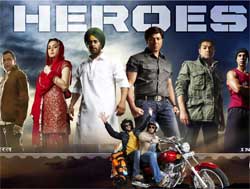 Mumbai, London, 9th September 2008: Eros International has acquired the worldwide rights of the much awaited HEROES and will release the film on 24th October 2008.
Audiences were treated to the first look of the film when the trailers hit the screens on 8th August. Produced by Bharat Shah, Vikas Kapoor and Samir Karnik, Heroes directed by Samir Karnik, has an eclectic star cast including Salman Khan, Priety Zinta, Sunny Deol, Bobby Deol, Mithun Chakraborty, Dino Morea, Sohail Khan, Vatsal Seth, Amrita Arora and Ria Sen.
Heroes is a journey of two boys who travel a thousand miles to meet their destiny and discover national pride. The film is a visual treat, having been shot across several locations in India including Delhi, Rajasthan, Himachal, Ladakh, Punjab and eastern India.
11 Likes

Deepika Padukone expresses gratitude to a fan who made her a ...

When Sehrish Ali braved a major back injury and continued to ...

Fatima Sana Shaikh says she was molested at 3: I was told I can ...

After 10 Years, Prabhas brings back his Romantic side in Radhe ...