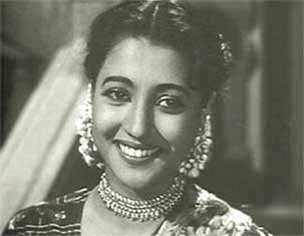 She was a "power woman" who "ruled" the Bengali film industry and became the "undisputed Number 1". The death of Bengali screen legend Suchitra Sen Friday is an end of an era, said actors of the regional film industry.

She, who had bewitched generations of film buffs with her grace and beauty, died at a Kolkata nursing home Friday following a massive cardiac arrest, a doctor said. She was 82.

She was being treated for the last 26 days following serious respiratory problems.

The reclusive Sen had, through her acting prowess, made a lasting impression on the audiences, despite shunning the limelight for three decades.

Here is what the film fraternity has to say:

Veteran actress Madhabi Mukherjee: "She had made a huge impact on everybody's mind through her sincere acting. It is said that she shunned the limelight, but she had reached the zenith of her film career and therefore, she left the field and then pursued her spiritual interests. After that she never returned."

Mukherjee observed how Sen could capture the essence of love and romance on-screen through her performances, sans the "kissing and bed scenes" that were shown in foreign films.

"There was no bed scene or kissing scene in those days, but she showed how without doing explicit scenes one can essay love and romance. We felt proud that when there were such scenes in the foreign films, in India, we could portray such romance sans the explicit scenes," she said.

Sen's sincerity in her work and her spiritual pursuits, later in her life, was a "mark of her dedication" to whatever she did, felt actress Moushumi Chatterjee.

Referring to her as 'Madame', he asserted, "She is the undisputed Number 1 actress. Her personality, her talent, and the way she carried herself...undoubtedly, without any prejudice, she is the number one."

"All those memories of us chatting after shooting came flooding back," said Mullick, who had acted with the film icon in "Debi Choudhurani" (1974).

Filmmaker Aparna Sen said she was "mesmerised" by her immense screen presence and beauty.

"It is the end of an era. I wanted to make a documentary film on her, but she had refused...I knew she would not accept."

"She was a power woman for us. Even if a research is conducted on her, she would be indecipherable. She was a ruler of the industry. She was a big influence for highlighting women's prowess in the industry."