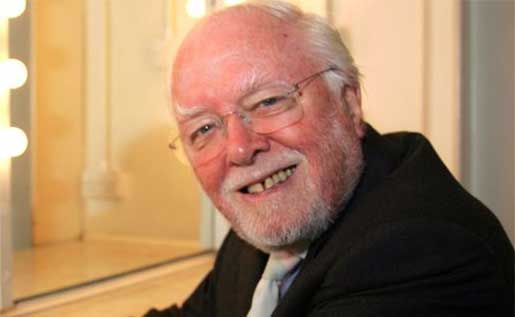 Bollywood pays tribute to late Oscar winning filmmaker Richard Attenborough and says that the demise of the "ultimate creator of celluloid biographies" marks the end of an era.

Attenborough died Sunday at the age of 90.

This is what members of the Hindi film fraternity have to say about him:

Annu Kapoor: My first earning in the city of Mumbai was on August 25, 1982 when I dubbed for a small role in 'Gandhi' in the presence of the great Richard Attenborough exactly 32 years back. We've now lost him. May god rest his soul in peace.

Kamal Haasan: He had the greatest respect for Satyajit Ray. In an interview, he said Satyajit Ray sent him a script to read. He said even if Ray had sent him an Indian telephone directory, he would have read it."

Rakesyh Omprakash Mehra: One of the greats of our cinema Sir Richard is no more. From "Brighton Rock" to "A Bridge Too Far" to "Gandhi" - he has given us so much. He lives forever in his work.

R. Balki: He was god. He reincarnated Gandhi.

Nishikant Kamat: Great actor and an even greater director. His "A Bridge Too Far" was the greatest war film of its times. His sense of filming real lives was incredible. He lived his dreams to the fullest. One of the most accomplished filmmakers, his sense of mega-shots and their execution was simply astounding. He had a macro vision of shot-taking, which very few filmmakers are blessed with. May his soul rest in peace.

Lillete Dubey: And with this an era ends. He will always be remembered as one who belonged to that rare breed which strode both stage and cinema equally effortlessly. Before any prominent Indian filmmaker dared, he made a film on 'Gandhi' and turned it into an imperishable classic. Fearlessly braving the carping of historians and critics, he took the spirit of Gandhi to the world. He will be forever remembered for that.

Onir: It's sad that one more beautiful artiste is lost to the world. Sir Richard's work specially "Gandhi", has immortalised him forever.

Hansal Mehta: What a life! And what a legacy!! Sir Richard Attenborough lives on.

Rensil d'Silva: There should be a biopic made on the ultimate creator of celluloid biographies.

Santosh Sivan: I think he was a filmmaker who spread hope and positivity through his documentaries and feature films. He was a true artiste. He loved nature. And we could see his closeness to nature in his cinema. "Gandhi" is timeless.

Shoojit Sircar: No other biopic on the Mahatma has elicited such a worldwide acceptance as Sir Richard's "Gandhi". One has the highest respect for what he has achieved.

Gurinder Chadha: I met him a few times, he was always the epitome of charm. He was a formidable stalwart of our industry with an amazing career as an actor and filmmaker. He struggled for many years to make his masterpiece "Gandhi", no one wanted to back him but he never gave up."