View Profile
Bollywood's notorious "serial kisser" (he even wore this slogan on his tee in one his films) hasn't yet quit his trademark scenes. But he has also moved on to something equally exciting and topical. Veteran of a thousand liplocks with a bevy of beauties onscreen, in his latest film, Jannat, Emraan Hashmi goes into another tangle: that of cricket and betting and bookies.
He, however, remains as unfazed by any image people may have of him as by whichever heroine braces up before him for the liplock. "I don't know why it gathers so much news when I kiss," he said. "It's not even at the back of my mind."
The last 12 months or more may have been uneventful for Hashmi, never mind the buzz he creates with his kisses. We are one quarter gone in 2008, too, but the tiny packet of dynamite promises a good year yet. He not only has Jannat coming up at the theatres soon, Raaz 2 also features in his near-future plans. 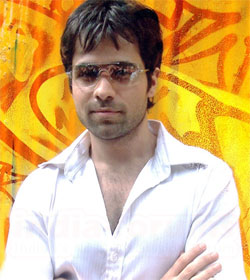 Featured Video
The upcoming film, Jannat, plunges into the cricketing world of match fixing and betting, which makes it topical in the long seasons of cricket in India which nows includes Twenty20s and ICL andf IPL. The seasons have also seen India come into its own in all versions and aspects of the game, including fighting sledging with sledging! And then there is the enfant terrible of cricket, Shoaib Akhtar, suddenly flinging charges of match fixing to counter his ban of five years by the Pakistan Cricket Board. Jannat seems to have its game all sorted out.

"Jannat is a love story set against the backdrop of cricket," says Hashmi. "We wanted to make a film on sports." That explains Chak De India and Goal coming up in the recent past, though with varying results. "There are no positive or negative characters in the film. They are all real characters," elaborated Hashmi..

"We stumbled upon this idea of the protagonist playing a bookie. He is someone who has big aspirations and wants to make a quick buck and is willing to go to any extent for that. He starts off as a smalltime gambler, an avid cricket lover and eventually gets involved in the betting nexus. "I play this crazy bloke, who wants to give his woman everything."

If we are to believe insider talk, Jannat touches upon real-life incidents like Pakistan coach Bob Woolmer's mysterious death, the Azhar-Jadeja match fixing episode in the past and so on.

Hashmi is no cricket follower, however. But director Kunal Deshmukh is very passionate about the game, and has been a keen follower of the game since his college days. "That's how the idea of Jannat originated," said Hashmi. "Moreover, I was very intrigued by Tehelka's book on cricket.

The filmmakers claim that Jannat doesn't deal with any particular person though audiences are welcome to discover 'similarities'. As far as they are concerned, there are none whatsoever. "It's entirely up to the viewer's discretion."

The film is about a sport the nation is crazy about and their intention is not to malign any cricketing icons or show anyone in a bad light. And that Is what Jannat is all about. (SAMPURN)