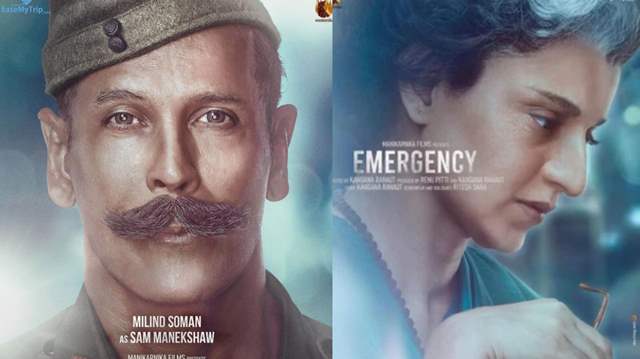 In her upcoming film Emergency, director Kangana Ranaut announced on Thursday that actor Milind Soman will play Field Marshal Sam Manekshaw. Kangana also debuted Milind's first look from the movie on Instagram. In the image, Milind was sporting a uniform and featured the recognizable moustache of Sam Manekshaw.

Sharing the post, Kangana captioned it, "Presenting the dynamic @milindrunning as #SamManekshaw, the man instrumental for saving India’s frontiers during the Indo-Pak war and whose service was as distinguished as his honesty; a charmer, a war hero and a visionary leader in #Emergency." Reacting to the post, actor Anupam Kher commented, "Brilliant."

Milind also posted the photo on Instagram and wrote, "Honoured to be a part of @kanganaranaut ’s directorial #Emergency and play the role of Sam Manekshaw, the man who, with his wit and gallantry, led India to victory in the 1971 Indo-Pak war!"

Several characters from Emergency have already had their initial looks revealed by Kangana. In the movie, Shreyas Talpade will portray the late Prime Minister Atal Bihari Vajpayee, and Kangana will portray the late Prime Minister Indira Gandhi. Mahima Chaudhry will be depicted as the cultural activist and Indira Gandhi's confidante Pupul Jayakar, while Anupam Kher will play revolutionary leader J P Narayan.

Kangana is the writer and director of the film, which is billed as recounting the story of a turning point in Indian political history. The cast and crew has started filming the project.

The movie's dialogues and screenplay were written by Ritesh Shah. Emergency is a Manikarnika Films production that has been created by Renu Pitti and Kangana.