Sony's Kabhi Kabhii Pyaar Kabhi Kabhii Yaar, the action-packed reality show where the celeb gets hounded by not one but two partners, will see the ouster of the first celebrity Jodi this Thursday… And unfortunately, making their exit from the show in the very first week is the very popular Kumud-Kshitij jodi of Amit Sareen and Aashka Goradia along with Vineesha. 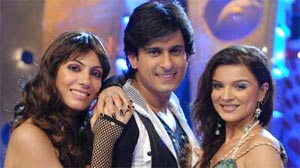 Featured Video
A little birdie from the sets says that Amit and his team felt they did not deserve to go out in the very first round. “The show is to judge a team based on dance, choreography and appearance. But unfortunately, the contestants in the first round had no say in the song selection, dance steps and even the costumes. Aashka had been telling the unit members that she would not look good in the costumes provided, and this is exactly the comment that Sameera had to pass after their performance. When the judges commented on the song on which they danced, Amit voiced on stage that it is not right to judge them on the criteria of dance and appearance when they had no say in it”, informs our khabroo.

Adding on, our source says, “Taking into view the points raised by Amit, few changes were made from the second round wherein the contestants were given an option to select from two given songs. They were also given the freedom to make few changes in the dance steps if required and above all, they got a green chit to choose the attire for the performance”.

Our source says that the very fact that these changes were brought in after their exit did not go well with Amit Sareen and his partners. Amit Sareen jodi's elimination in Kabhi Kabhii Pyaar will be shown on 17th July, Thursday at 8 PM while Hiten Tejwani-Gauri Pradhan-Nandini Singh will be the second pair to go out...

14 years ago That's really sad. The Amit-Aashka jodi is amazing. I really liked them both in Kkusum.

14 years ago Thanks .Can i know where is the botton to rate .ican't find it .Even the Thank you botton is not working