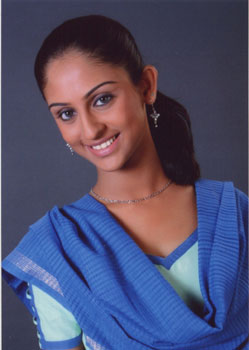 Meet Krystle D'Souza, Ekta Kapoor's new find! A complete stranger to the TV world, just 17 years of age, Krystle D'Souza, till yesterday, was popular in her circle for being the winner of the dance competition at Xavier's College, but today, things has changed for this young girl.., for she has bagged th lead role in Ekta's new show on the to be launched mega Hindi General Entertainment Channel - 9X..

How did Krystle get this role? On Independence Day, Krystle was wandering around her college when a Balaji official approached her, and told her that her face suited one of the characters and if she can audition for it. A screen test later, she was the protagonist of Ekta's new show on 9X. Krystle went on to polish her acting skills with actor - Anupam Kher at his acting school.

It's now to be seen whether Krystle D'Souza is a star in the making or not!!
Featured Video

14 years ago the last sentence is a rhetorical ques right?!?! i mean all of ekta's finds are stars! well all e best for this one too!!

14 years ago Good luck to her lets hope she has lots of success !!!!

+ 2
14 years ago HOPE KRYSTLE MAKES BIG AS A STAR.WHAT CHANNEL IS THE SHOW IS COMING ON??