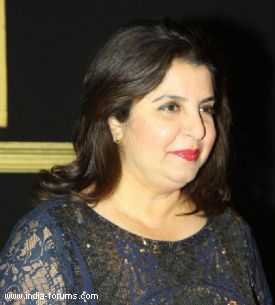 She managed the rare feat of bringing a caravan of 31 cinestars together for a song in "Om Shanti Om" in 2007. Now for her new film "Happy New Year", Farah Khan has been busy handling a cast of six, including top-rated actors like Shah Rukh Khan, Abhishek Bachchan and Deepika Padukone, and the multi-faceted filmmaker says her triplets are easier to handle.

How does she manage to handle such a cast?

"Let me tell you, it's much easier to handle triplets and less tiring too," the effervescent Farah, a mother to two daughters and a son, told IANS over phone from Mumbai.

What makes Farah happiest about being on the set of "Happy New Year" is the oneness of her eclectic cast.

"I always feel your movie will be as strong as your weakest link. So if I ignore somebody, that's not going to be good for the movie. Even Shah Rukh knows that and he always keeps telling me to concentrate on Vivaan or make sure Sonu's character is coming out well because each character is important," she said of the musical heist, which will have strong elements of a formulaic heist movie and dollops of dance and music.

"In 95 percent of the movie, six of them are always together. So just in terms of logistics, it's a nightmare because someone wants to come late or leave early. But the chemistry between all of them is so great even off screen, and that is translating very well on screen," added the choreographer-turned-filmmaker.

Even the recently launched first poster of the movie features all the six characters.

Yes, Shah Rukh is in the centre of the poster, but he's not snatching away the limelight from anyone.

"Nobody has an ego problem, nobody wants to stand in the middle, nobody says you've eaten my line or 'I want to say that line'. Everyone is helping each other out during a scene and that is translating well on screen because if the chemistry doesn't happen, then the movie won't work as they are one team in the film," said the 48-year-old, who made her directorial debut with 2004 movie "Main Hoon Na", starring SRK.

This is her third film with King Khan after "Om Shanti Om", which was Deepika's launchpad. In 2010 Farah had directed her third film "Tees Maar Khan" starring Akshay Kumar and Katrina Kaif.

After four years, the audiences will get to see her fourth project.

There's been a difference of almost three years between each of Farah's projects. Any reason?

"I always say that I'm a filmmaker, not a factory. I don't have to churn out films every six months. After 'Main Hoon Na', I got married; so I took some time off. After 'Om Shanti Om', I had three kids, and then after 'Tees Maar Khan', I wanted to go back to basics and spend some time writing my own script," she said.

Although there is a certain gap between her films, Farah says that if she stumbles upon an interesting story, she may not wait for a particular time to bring it on the screen.

"So it's just a co-incidence. Tomorrow, if I find something exciting and it falls into place, I'll take it up. It's not something I have deliberately done, but I like it. I don't want to go on churning out films," she said.

The director also points out that making a good film takes time.

"It takes two years to make a good film," said Farah, who keeps herself busy with reality shows and choreography assignments when she's not donning the director's hat.

Kangana Ranaut Vs Anurag Kashyap: Actress ‘Steps Back’ after ...
50 minutes ago