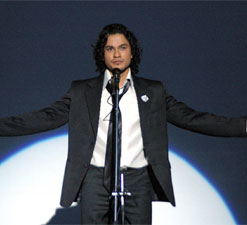 The boy who used to be known as a child actor is now known to everyone as a shining star in Bollywood. From his first film 'Kalyug' Kunal has proved that one day he was going to be a superstar. It is difficult to tell whether he will become a superstar in reality in the near future, but Rohit Jugraj has presented Kunal as a 'Superstar' . Here is what he has to tell about himself, his films and his future plans.

Q: You are doing a double role for the first time in 'Superstar'. Tell us something about the film?
A: I am not only doing a double role in 'Superstar' for the first time, but it is also my first commercial masala film that has dance, emotions, drama and tragedy. This film is basically based on dreams. The film’s story is based on two characters Kunal and Karan. The story mainly focuses on Kunal whose dream is to be a superstar one day and his film be shown on 70mm screen. He doesn't only dream, but also works to realize his dream. He is a dancer and stuntman and is used as a body double in films. He is a middleclass boy who works very hard to become a superstar. In this course, he meets a boy whose face exactly resembles his. His fate is to be a superstar as he is son of a very big producer. His father is going to make the year’s biggest film, but Karan has no interest in all that. The story is about how they both meet and the film takes a new turn.

Q: Usually an actor has to work very hard when he is performing a double role in a film. How much did you strain yourself here?
A: To be true, I didn't had to work very hard and the credit for this goes to my producer and director who had faith on me that I will be able to carry the burden of a film with a double role. When they trusted me so much my responsibility towards the film also increased. I was doubly excited because in spite of the film being based on two identical persons, the story is not about twin brothers or any reincarnation. I am happy that I could do justice to both the characters. Now it is up to the audiences to judge whether they like the film or not.

Q: While doing the role did you ever feel like a person with a duel personality?
A. Both the characters are very different from each other. I relate myself to Kunal a lot because his ambitions and dream are very much like mine. He is also hard working like me. According to me, we all have something that motivates us to do other things. We all think that if we were not like this then we would have been like that. I always get to do things that I can't do. Like me and Kunal. There is a lot difference between me and Karan. I enjoyed doing that character a lot because I will never do things the way he does.

Q: From straight hair to curly hair and Aashima's injured nose, do you recall any memorable incident while shooting for the film?
A: Each day I spent on the sets was memorable for me. I used to change my look on the sets itself and for that it used to take me more than an hour to one-and-a-half hour. I had seen a lot films with double roles, but it was first time where I saw how these films were made, how the camera moves etc. At the time of special effects I used to remain on the sets and see how the editing was being done on the computers. All these things were new for me.

Q: When we were talking to Tulip, she said she had to slap you in one scene and she slapped you hard to revenge for injuring Aashima’s nose. What do you have to say on this?
A: (Laughs) I don't know how she took revenge for Aashima because the scene where she slaps me was filmed before Aashima's scene. Yes, there was scene where Tulip slaps me and mostly the slap is just pretended, but she got in full emotion and slapped me hard. However, after that she got very nervous and kept saying sorry for the whole day.

Q. Your last film 'Dhol' was not successful at the box-office, what are your expectations from this film?
Featured Video 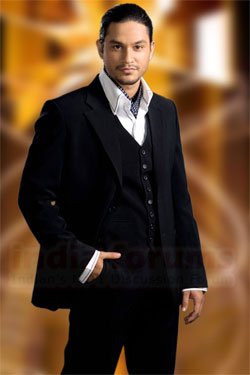 A. See, every actor puts in his whole-hearted effort in every film His expectations are high from every film he does. Similarly, I have expectations from this film and they are a little higher because I have a double role in the film. Besides, this is my first commercial masala film. We all have worked very hard for this film and I expect that the audiences should see this film at least once. It is my guarantee that they will not get bored, but rather will be fully entertained.

Q. Like in this film, how will you feel if you come to know that there is your look-alike somewhere?
A: (Laughs) I don't know and after completing the film I didn't even think on that. We will see what happens. If I come to know that I have a look-alike it will be a shock at first, but I will try my level best to meet him.

Q: After acting in serious roles you did comedy in 'Dhol'. Which genre of films do you wish to do in future or what kind of films would you prefer choosing?
A: It is not that I will be giving attention to any particular genre of films. I will choose from the stories and characters that come to me, be it comedy or serious.

Q. Which are the films where we are going to see you ?
A. I have signed a comedy film for UTV recently. Other than this film I am doing 'Jai Veeru' which is a action-comedy and I think action-comedy are the best combination. I am also doing a film with Fardeen Khan. The shooting for this film is going on. The shooting for the film with UTV has not started yet, so I can't talk much about that film and there are many other films and talking about them will be too early.

Q. Tell us about the English film - 'When Harry tried to Marry' ?
A. This film is closed now and it was to be made before 'Kalyug'. The story has been written by my friend Nayan who stays in America , I did listen to the story but at that time there was not any talk that I will be doing this movie. The story has won a lot of awards in America. For now no film is being made on that story and if that film comes to me and if I like the story then I will definitely do that film. Other than this I have nothing to say.
Rajnee Gupta- (SAMPURN)