Recently Amit Jain and Priya Bhatija who essay the roles of Shantanu Mehrotra and Nandini Parikh respectively in NDTV Imagine's Basera were shooting a car sequence on the busy roads of Powai. 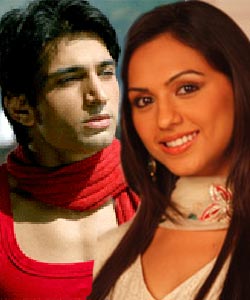 Featured Video
The scene required Priya to float her dupatta outside the running car, and Amit Jain traveling in another car on spotting the dupatta had to tell the girl about this when their cars stopped at the traffic signal. This cute scene marked the first meeting of Nandini and Shantanu in the show wherein they both fall for each other at first sight.

However, the entire crew found it very difficult to shoot this particular car sequence. According to our source, "The problem was that this car sequence was happening in broad day light on the busy roads of Powai. Every time Priya's car would take off with her dupatta protruding outside the car, a group of onlookers and passers-by used to wave to the car and indicate about the dupatta. The unit had to go in for many a retakes as this happened every time the car got on the move".

We talked to Amit Jain who tells us more about the hilarious incident. "The passers-by ended up stopping the car and uttering my words (smiles). In fact, I was the one who had to tell the girl that her dupatta is protruding outside the car. It took us a long time to finish this sequence, but the scene came out beautifully and all liked it".

Basera has been getting a good response in its first week, and to pray for the success of the show, Amit Jain and Priya Bhatija plan to visit a lot of Ganpati mandals, including Siddhivinayak. "I thank Sagar Arts and NDTV Imagine for giving me this show. We plan to gather a big group of co-stars from Basera unit and will offer our prayers at the mandals to pray for the show's success", quips Amit.

+ 4
13 years ago Show is nice, and the whole cast is also very nice.Thanks for this article.

13 years ago thank u so much 4r the article.n yeah the total scene was very cute one with a wonderful song in the backgorund.it was simple yet very cute scene

13 years ago I havent even started watching it! It hasnt started in UK. Thanks for the article