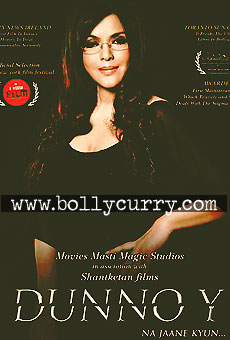 Bollycurry recently reported about the international success and acclaim being garnered by the movie Dunno Y'Na Jaane Kyun. On the home front, though, anticipation for the movie has been fraught with protests, so much, that the release for the movie is being postponed to Diwali.

The youth unit of a right-wing political party has been sending threats to the producers of the film, insisting that homosexuality goes against the culture of India. Other individuals and organizations have also been doing the same, on grounds of culture, heritage, and value systems, compelling the producers to postpone the film's release, so matters can first be resolved. The release date has hence been shifted from the Friday just past, to Diwali weekend.

A sharp bolly-goer will notice that the release date now coincides with that of 2010 mega releases, Action Replayy and Golmaal 3.

Can it influence the commercial success of this already troubled movie? We suppose so. The producers are, however, unfazed by this. They state that the other two movies are both comedies, and thus in an entirely different genre from Dunno Y, which focuses more on the emotional conflicts that the two protagonists face, arising from their gay relationship in an Anglo-Indian family.

The producers are emphasizing that they are not sensationalizing homosexuality, and have even invited their adversaries to watch the film and judge for themselves, so that the film's release will finally be a smooth one.

After all, presenting a minority section's side of the story, and points of view, can't be thoughtlessly tagged averse to culture, always?

We wish the movie all the best in its release!