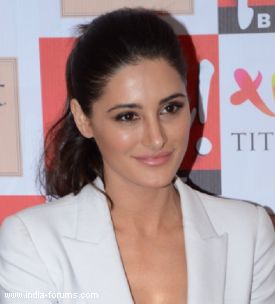 Model-turned-actress Nargis Fakhri, who is not so fluent in Hindi, got to dub for David Dhawan's forthcoming Bollywood movie "Main Tera Hero" and she enjoyed doing it.

"I am through with the dubbing. I dubbed in Hindi for the first time. It was awesome and scary. I did enjoy and learned a lot," said the actress whose voice was dubbed by someone else in her debut Hindi movie "Rockstar".

However, she had dubbed herself in English for John Abraham-starrer 2013 film "Madras Cafe".

"I will start promoting the film in a bit. Comedy is difficult, but I had a great time working with everyone. It's releasing on April 4. After its release, I'll start shooting right away for 'Shaukeen'. It's remake of the old film. It will be a new modern take of that," she said.

"Sushant felt that his sisters were after his money": Rhea ...
4 hours ago

Vipul Amrutlal Shah on conducting workshops with aspiring ...
4 hours ago