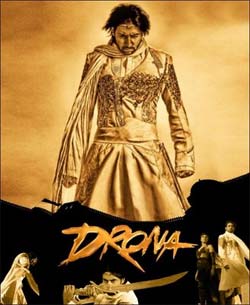 David Bush (Armageddon, Bicentennial Man) is the VFX producer and supervisor on the film. The vfx work has been done at six facilities in India, which are EyeQube, Tata Elxsi, Prana, Red Chillies, Prime Focus and Future Works.

EyeQube which is Eros' visual effects company has worked on almost 300 vfx shots. Eros is the producer of Drona along with Rose Movies. The balance vfx shots have been worked on in other facilities.

Producer Shrishti Arya said, "Drona is the first Hindi film with so many vfx shots and also the first movie for which the vfx work is being done by so many companies. Since there were so many vfx shots in the movie it had become imperative to involve other companies as well."

VFX producer and supervisor Bush adds, "Drona is my first experience with Indian cinema. I have never made so many visual effects in a single film before. My sincere hope is that they will all go as un-noticed as possible because they are intended to help tell the story and not behave like spectacular, individual, show-stopping visual effects."
Featured Video