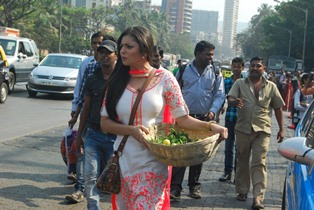 We heard from our source that, "Drashti saw a mother daughter on the road and she realized that it would be difficult for her to sell nimbu mirchis to them. Using her creative mind, Drashti used nimbu mirchi as a fashion accessory and she hanged the nimbu mirchi on the little girl's earrings stating it as a new fashion statement in the town. Drashti also managed to sell nimbu mirchi at Rs. 100 to a BMW owner. Along with this, the famous actress Drashti also entertained everybody. She danced on the road with a fan of her and narrated dialogues of from her own show for an old couple and she made them say the three words to each other."

"Drashti also gave away nimbu mirchi to school girls at the traffic signal and other to her good friends actress Nigaar Z. Khan," adds our source.

Quite a tough task for Drashti! Isn't it? Her creativity to sell nimbu mirchis must have worked well for her! It would be quite interesting for the viewers to see how Drashti's creativity will work for her to gather a huge amount for the cause.

madhu17 6 years ago Drashti good luck for jhalak...love you + 4
6 years ago It was an amazing episode. Loved Drashti throughout. 6 years ago Drashti Dhami, good evening, do remain your cheerful self princess...

6 years ago Drashti Dhami, you made your stint on MS a fun to watch.