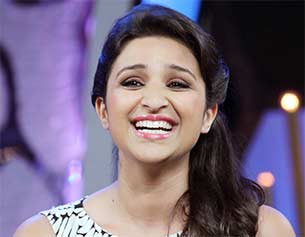 Actress Parineeti Chopra is seen grooving to the beats of "Drama queen" in her new movie "Hasee Toh Phasee" and she says that she takes the word very positively.

"The word 'drama queen' is very positive for me, because I am like that. I am very outspoken, I talk loudly, I am always happy and smiling...I do a lot of dramas and I don't think it's a bad thing," Parineeti told reporters during a promotional conference of the film here.

The 25-year-old says coming to the sets of the movie, which also features Sidharth Malhotra, was not new to her because she has always done medium budget films.

Parineeti, who made her Bollywood debut with "Ladies vs Ricky Bahl", says she had a lot of personal pressure while shooting for the movie.

"I wanted to do something different and I got this movie. The role is not like 'Ishaqzaade' or 'Shuddh Desi Romance' because in those two I played very Indian characters. This was completely different, I am off (mentally) in the movie and because of that I really had to do a lot of work" she said.

"I used to try and make the dialogues easy by continuously repeating it so that it's there on my tongue and I get very depressed if I feel that I have not given my best in a shot, so that way I had a lot of personal pressure," Parineeti added.