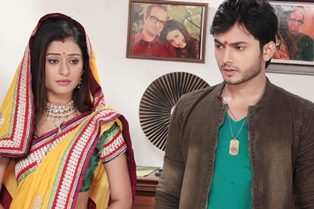 The channel's three month old show has already grabbed the attention of the viewers by delivering high dose of drama through power packed performances.

However, the real drama will shape up when there will be a theft in the house. Navlakha Devi's (Prachee Pathak) elder son, Balbal, wants to pursue his political career and demands support from his family. No one except his mother supports him in this endeavor. She asks Abhinandan to arrange for money. Taking advantage of the situation, Sawaro steals some money from the briefcase to clear off old debts.

Navlakha Devi takes the house by storm on discovering about the theft.  Confusion sets in and there is a rift in the family. This has happened for the first time and Navlakha Devi decides to take charge of the situation. Amidst the blame game, she declares that she would not drink water nor eat anything till the culprit confesses to her and returns the money. She promises to forgive the criminal on doing so. But no one owns up.

Navlakha Devi's condition starts deteriorating and she has to be rushed to the hospital. Surprised at the family's indifference towards the situation, Sia (Payal Rajput) decides to sell off her jewellery and return the lost money to Navlakha Devi. She takes the blame on herself to save her ailing mother in law.Her confession takes everyone by shock and gives a new twist to the situation. Samar declares in front of everyone that he cannot live with a thief and he has decided that he will not live with Sia and she should leave the house.

What will be Navlakha Devi's reaction to this? Will Sia's sacrifice go unnoticed? Where will fate take Sia and Samar's relationship?