Mumbai, Nov 14 (IANS) Bollywood's ace filmmaker Karan Johar seems unperturbed by the scarcity of clothes and the profusion of gay jokes in his production venture 'Dostana' that releases Friday. He says the film would not offend anybody.

'It's fun and new. We've made sure not to offend any group or community. I'd never make a film that would offend anybody. 'Dostana' has a great look and it's a clean happy watch,' Karan told IANS. 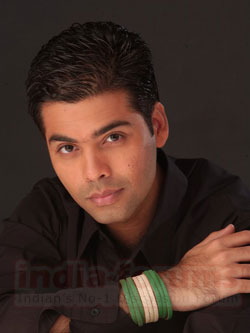 'The chemistry among Abhishek, John and Priyanka is fantastic. As for the gay jokes, I think it's time for everyone to wake up to reality. I had gay jokes in 'Kal Ho Naa Ho' and no one was offended,' Karan added.

He also clarified that there is no rivalry between him and Aditya Chopra and that his 'My Name Is Khan' wasn't delayed because of Yash Raj Films' 'Rab Ne Bana Di Jodi'.

'Far from it. Adi's film releases December 12 and I start immediately after. Yes, I did delay a bit for him initially. But it was a very minor delay for a month. If he asked me, I'd delay my film a year for him. Not only that, Yash Raj Films distributes our films. So where's the question of competition between us?'

As for Karan's next directorial venture, he clears some misconceptions.

'My Name Is Khan' has nothing to do with terrorism. It has Shah Rukh and Kajol in the lead. More than anything else, it is an emotional drama. It's more about the absence of humanism than politics. I'm not fighting for any cause. But at the end of the day cinema is a reflection of the times.

'In the 1970s and 80s, political upheaval was huge. In the new millennium, international terrorism is as huge a problem as global warming. But since global warming doesn't make dramatic viewing, terrorists are definitely the antagonist of our times. I've seen 'A Wednesday', which I absolutely loved. I'd love to meet and congratulate the director (Neeraj Pandey). In fact, I wrote a whole blog about the film.'

Any mention of the film being about Islamic identity puts Karan on the defensive. 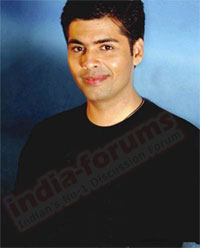 'At its heart 'My Name Is Khan' is a love story. At its soul it makes a social statement and at its core it's a tale of the triumph of the human spirit. My writer Shibani Bathija and I come from the same emotional head-space. Anyway, it's too early to talk about the film.'

'I haven't seen 'Kidnap'. I was down with viral fever when it was released. So I can't comment on the film. But I can say 'My Name Is Khan' is Shibani's baby all the way. She has given two years of her life to researching Shah Rukh's character. I'd be just executing her vision.

'As for her work in other films, every creative person falters. You need to move on. Even I've made mistakes. But that doesn't stop me from taking risks. I think I took a big risk with 'Kabhi Alvida Naa Kehna'. I don't think any other director has made a Rs.50 crore (Rs.500 million) film on infidelity.'

Karan recently returned from location-hunting in London and Los Angeles. Call him a seasoned traveller and he retorts: 'I'm a traveller for all seasons. We're shooting 'My Name Is Khan' in San Francisco and LA. With 'Kabhi Alvida...' and now 'My Name Is Khan', I want the bubble to burst about my bubblegum cinema.'

Is it true that he and Aditya are making Hindi versions of the same film 'Arlington Road'?

'Look, the film that Rensil D'Silva is directing for me and the one that Kabeer Khan is doing for Adi both have terrorism at the background. So there would be similarities. Rensil's film and Kabeer's film have terrorism as their base but different themes. Both Rensil and Kabeer have worked hard on their script,' said Karan.