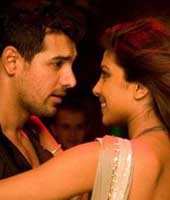 The first thing you will notice in the movie is that, John is a "Sizzling Hottie, who wants to get naughty "
Featured Video
. ‘Dostana’, film starring Abhishek Bachchan, John Abraham and Priyanka Chopra, is a much awaited film of the year from the camp of Karan Johar, directed by Tarun Mansukhani. The film appears to be a romantic comedy for youngsters and so is its music.


This is the story of two guys Sam aka Sameer (Abhishek Bachchan) and Kunal (John Abraham). The two meet by co-incidence and then they decided to pose as a gay couple so that they are allowed to stay in Neha's (Priyanka Chopra) house. The story just takes off from here and then on moves through hilarious incidents before it touches the soft pad of emotions. Neha is introduced to Abhimanyu (Bobby) and romance happens. And of course, two 'gays' in love can create havoc in any relationship. So they do!


While the story of Dostana does have the essence of Deewana Mastana plus the gay element, it has its own extremely fresh approach. The screenplay works at adding the humour. Scenes like the one Maa Da Ladla Bigad Gaya song, Sam's mother (Kirron Kher) accepting Kunal as her 'bahu', Neha thinking that both Sam and Kunal are like Abhimanyu etc are some exceedingly funny moments, with wonderful dialogues.


The movie is not the typical Indian movie story and hence could do well, the subject is also a little mature for India. The movie does bring out the subject of homosexuality to main stream film in india. 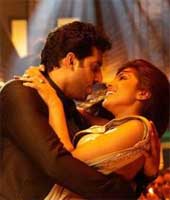 The movie is well directed and Director Tarun Mansukhani is here to stay, plus the music by Vishal Dadlani and Shekhar Ravjiani is perfect and energetic. Both John and Abhishek have acted very well and have delivered a great "Gay" performance. Again Priyanka looks stunning and has given back to back good performance.

On the whole, a fun film. Watch it to know it. It most certainly does bear the mark of Karan Johar even though it has been directed by debutant Tarun Mansukhani. And if this is what the new director is capable of, we can surely expect better with experience! Have fun.


Bollycurry Rating: 3 chillies out of 5. Over hyped movie but still a good weekend watch...