Last Saturday's episode of Zee TV's Dance India Dance, produced by Th Right Picture put Grandmaster Mithun Da in a dilemma as he could not choose between Ameeth Kumar and Kishore who were in danger zone. 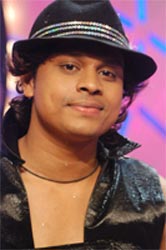 Featured Video
As we reported, Shruti Basakhetre from Geeta Ki Gang was eliminated from the contest last week, but it was a tie between Ameeth and Kishore. Mithun Da had told the Masters that he wants to give both of them a fair chance, and that the two will be given time of about 90 seconds to perform their act next Friday. Mithun Da had said he would then decide who will stay and who will bow out.

And as informed by the Grandmaster, this Friday's episode did begin with the 90 second do-or-die situation for both Ameeth and Kishore.

According to our source, "Ameeth and Kishore who secured a second life line, as Geeta aptly put, did put in their best for the act. While Ameeth danced on a classical number, Kishore performed on a western song. Finally, the onus was on the Grandmaster to choose the winner, and he chose to keep Kishore while Ameeth from Terrence Ki Toli was eliminated".

The face-off between Ameeth and Kishore will be aired this Friday.

Let's see who bows out of the contest this Saturday!!

+ 4
12 years ago Iam from Hyd , but i was surprised when terrance opted for ameet and not Altaf or melvin.... welll iam glad kishore is in

12 years ago remo already started playing safe game, he is going to send his strong contenders, while Geeta and Terrance as usual will send the contestants that didn't do well, or made mistakes,

+ 4
12 years ago I dont think Ameeth was that bad...he was quite good. I dont think Terence would regret his decision

12 years ago Kishore's a better dancer n keeping the long run view in mind, i guess Ameeth was clear choice for elimination

+ 2
12 years ago Mithun made the right choice, Terrence must blaming himself for choosing Amit instead of Melvin

+ 4
12 years ago no suprise. Kishore was great on saturday.