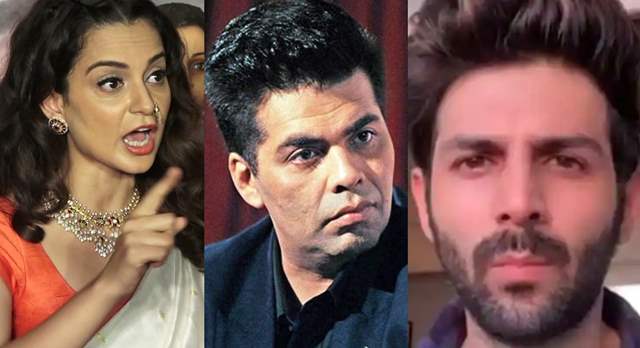 Kartik Aaryan has been fired from Karan Johar's one of the most anticipated project, Dostana 2, the second installment of hit franchise, Dostana.

Since this morning a lot of stories about Kartik being replaced from the film has been making rounds.

A few hours ago, Dharma Productions, Karan Johar's production house released an official statement about replacing Kartik in the film.

Now, Kangana Ranaut has reacted to the news and warned Karan to not go behind Kartik and force him to end his life like Sushant Singh Rajput.

Retweeting the post of Dharma Production's official statement, Kangana wrote alongside a note containing a strong and firm message.

Her message read: "Kartik has come this far on his own, on his own he will continue to do so, only request to papa jo and his nepo gang club is please leave him alone like Shushant don’t go after him and force him to hang himself. Leave him alone you vultures, get lost chindi nepos..."

25 days ago A non-Indian’s perspective here. Turning the Indian entertainment industry upside down is long overdue. It’s been on the wrong trajectory for the last few decades. It’s also time to stop calling it “Bolly … whatever.” That’s a repulsive name and alludes to subjugating oneself to Hollywood and seeking their condescending approval. Hollywood is a totally different animal with different priorities and audience. Indian TV and Movies cater to completely different clientele and society. Just like planting Indian sensibilities in Hollywood is stupid, so is transplanting stuff from there into the Indian environment. You can choose and adopt some good practices of Hollywood, of which there are many, but don’t let the bright lights of that environment blind your priorities in India. You risk turning yourself into a “wannabe Hollywood” when you do that and it’s very sad. Lastly, Indian TV and Movie entertainment needs to start looking inward for interesting, positive stories here and cater to Indians before prioritizing their attention to the markets in the other parts of the world. I need not point out which parts of the world I refer to.