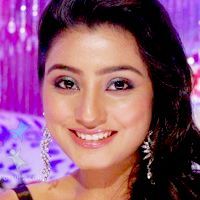 Small screen actress Neha Marda, who plays Urmi in TV show Doli Armaanon Ki, met with an accident on Tuesday morning while driving to the sets of the show. She suffered minor scratches.

She was driving the car, which is badly damaged, and she was rescued by bystanders and police.

Neha had a narrow escape and doctors are examining her as they suspect internal injuries, said a statement.

However, Neha has refused to skip the shoot as she does not want the production house to face any inconvenience.

In the past, the actress was seen in the popular TV show Balika Vadhu as Gehna.

On Literally Begging For Good Work on TV - Sameeksha Sud

myrah13 6 years ago Get well soon neha..love u moha love u samur..

..Breeze.. 6 years ago Hope she has a speedy recovery! Get well soon !

leavesandwaves 6 years ago Keep a driver. Mumbai roads are not safe.

Hopeenlight 6 years ago Praying for and wishing you a speedy recovery dear Neha! You're an awesome person and deserve to be hale and hearty always!! Blessings!

padmavar 6 years ago Please get better soon. Hope the injuries are not too serious.