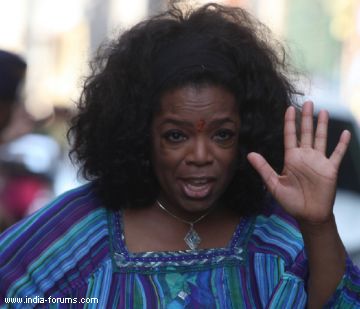 Oprah Winfrey went to the slums, visited the Taj Mahal, socialised with Bollywood's gliteratti and explored real India on her maiden visit to the country. Now, the international talk show queen is set to share all that in a two-part series on her show - "Oprah's Next Chapter".

The series will be simulcast on Discovery Channel, TLC and Discovery Channel Tamil July 20 and July 21. In the programme, Winfrey discloses the emotional link that she could feel for the people, culture, and the country.

"After 25 years I got myself out of the studio chairs. I moved into the next chapter, and I am having more fun than ever - moving around the country and the world, talking to people I'm really interested in getting to know and I think viewers will be, too," Winfrey said in a statement.

"It is so energising to be out and about in the world exploring new people, new places and new ideas," she added.

Winfrey has interviewed over 28,000 guests in her 25-year association with TV.

Rahul Johri, senior vice president and general manager - South Asia, Discovery Networks Asia-Pacific, said: "We take viewers to rediscover India with one of the most iconic TV personalities in the world. Oprah has connected with audience through her chat shows and in 'Oprah's Next Chapter', she transitions to a new phase in her life."

"Audience will see her embrace Indian culture through in-depth conversations with people from different walks of life," added Johri.