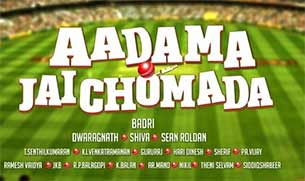 Director Badri says his next Tamil directorial "Aadama Jaichomada" is about corruption in sports in the country and the spotlight will be on cricket.

"The general rule of a game is that one will win and another will lose. The winner will get the trophy. But today everything has gone for a toss. The winner may get the trophy but the loser gets enough money. There is rampant corruption in sports today," Badri said in a statement.

The story will revolve around cricket betting.

"Today, the cricket match, especially that makes us go crazy watching it live, is scripted by someone somewhere. Someone else, away from the action, decides the drama elements. Cricket is like a religion in the country. Elders follow the sport with craze, while children play with utmost passion. Such a sport is marred by corruption and bribery," he said.

He said it is disturbing to read such news in newspapers and watch on television every day.

"So this prompted me to do a film. The betting, which spoiled the sport, is narrated in such a way that it would be understood by the common man too in the movie. But it is laced with humour," he added.

Radio jockey-turned actor Shiva will pen the dialogues for the film which will be produced by Madhu Sudhanan and Sudhir Jain.

Shiboprosad Mukhejee and Nandita Roy Come on Board to Direct Cricket ...