View Profile
Mumbai, Aug 11 (IANS) Dino Morea has entered a new phase in his career by starting his own production house. His first assignment is an ad film, with Kareena Kapoor and Karan Johar, for a paint company. 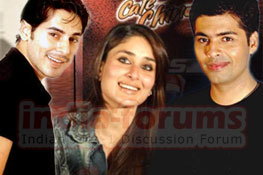 'On Aug 25 and 26 we're shooting our first film. It's a multi-starrer featuring Karan and Kareena ... Can't start any higher than this, can I?' Dino asked.

'Hopefully, it's only the beginning of more exciting things to come,' the actor told IANS.

Dino's earlier partnership for his production plans came to nought.

The actor has quite a few releases in the pipeline. He is about to be seen in a clutch of movies including Ananth Mahdevan's 'Anamika', Pavan Kaul's 'Bhram' and Apoorva Lakhia's short film 'Sex On The Beach'.