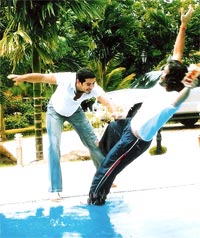 The 'infamous' face-off that has been spoken of , at length between the two Super Models, Dino Morea and Milind Soman was predicted to fire-on again, as the duo took to the sets of Magna Films 'Bhram'. Very aptly, the reason for the long-lasting clashes between these two 'Titans' has been the girl, Bipasha Basu!


According to inside sources from the sets, it was a pleasant surprise as Dino and Milind, for a change clicked well and even played pranks at each other! One such notable incident was that, when Dino played a prank on Milind, who was relaxing near the swimming pool sipping his glass of drink. Dino, the prankster got into action and pushed Milind into the swimming pool, all of a sudden. This created a chaos on the sets, as all assumed that there would be a war of words, but alarmingly, nothing of that sort happened, as Milind came up the pool, a sportive man!

It is learnt that this incident actually enabled the stars to turn tables in their favor and the shoot for the emotional thriller went off well, without any unnecessary problems coming from the Super Models.. -(sampurn)