Star One's Dill Mill Gayye, produced by Cinevistaas has always maintained their story very simple, when it comes to their fun tracks or plots

Featured Video
based on friendship and love. However, for the first time, they are attempting bit of drama with the track between Dr. Shashank (Mohnish Behl) and Dr. Armaan (Karan Singh Grover).

Says Amita Devadiga, Creative Head of the show "This is a very nice track between the father and his could-be son-in-law. The debate between them is just a starting point to a new twist. The next one and half to two weeks will focus on how the chemistry between these relationships gets changed. What's gonna happen next???, will be the question and you will have to wait and watch to know more".

Dill Mill Gayye had yet another reason to celebrate as they completed 300 episodes on the 12th of February. They had a small party bash organized for the crew and cast members which was a rocking affair. "This was indeed a milestone for us, as we have come a long way with this youth-based show", quips Amita.

On the track ahead, Amita states, "There have been rumors that if Armaan-Riddhima get together, there are chances of DMG going off air as there is nothing more left. But you will see something really interesting in the coming weeks that will take the story to a new high".

Well, as for now, watch out for the debate that kicks-off between Shashank and Armaan on the 17th of February, as this will pave way for a very interesting track.... 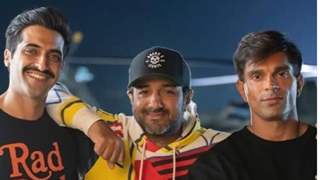 cute_scorpion13 13 years ago hmm, i like dmg caz it creates alot of suspense but at the same time , they take over AR , and i like all the characters but wish all the best for AR.

13 years ago Omg, so excited for these upcoming episodes. DMG seriously rocks my world. Refreshens me up .. <333

+ 3
13 years ago congrats to DMG for completing 300 EPISODES.LUV this SERIAL FROM THE BOTTOM OF my HeArT.SPLLY our ARMAAA....N MALLIK.HE MAKES THE SHOW ROCK FOR ME.I want to congrulate the makers of DMG for completing 300 epi of aYOUTH BASED show which is just IMMPOSSIBLE for ANYONE with a YOUTH APPEALING CONCEPT in country like india where all the PRAISES r taken byTHE FAMILY DRAMA''S.All The Best Guys.WAY TO GOOOOO....

13 years ago its funny how ppl say the show must go off air and its boring and sux yet we write 271 comments on a DMG article....that sounds like popularity to me!
Congrats to DMG team! Keep Rocking

13 years ago Noor Abdilaah! who is harshad? isnt he present in kdmhmd? Dill Mill Gayye has never ever showed a single jhalak of his! We are talking bout Dill Mill Gayye not that boring nd sorry to say according to me Bakwaas show Kis Desh...........