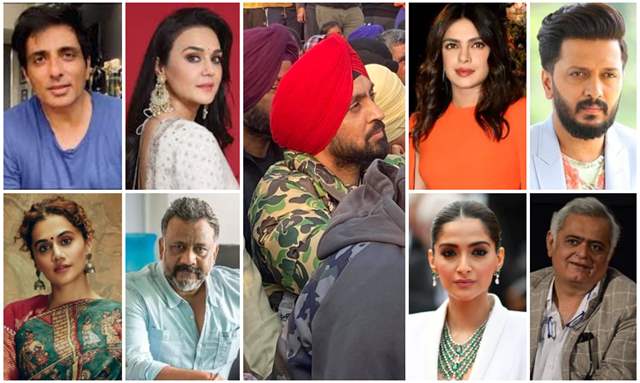 India continues to witness protests from farmers and activists against the Centre's farm laws. Several Bollywood celebrities are gradually coming out in support of the farmers and their concerns.

Actors like Diljit Dosanjh, Riteish Deshmukh, Richa Chadha, Hansal Mehta, Anubhav Sinha, Sonam Kapoor and husband Anand Ahuja, Sonu Sood, Taapsee Pannu, and many more celebrities have expressed their stand on the issue which recently made it to the international headline.

Now, Priety Zinta and Priyanka Chopra have also joined forces and expressed their stand about the same.

Here’s how celebrities have expressed their stand about the brewing issue:

Last week, Twitter saw an ugly feud between Diljit Dosanjh and actor Kangana Ranaut who misidentified an elderly Sikh woman during the farmers’ protest as Bilkis Bano of Shaheen Bagh in one of her Tweets.

Dosanjh's cutting retorts to Ms Ranaut in Punjabi went viral on Twitter, setting off a trend of Punjabi wisecracks on the social networking site.

Meanwhile, the Punjabi pop star received support from all quarters during the fight that led to the escalation of the issue.

Bollywood artists like Taapsee Pannu, Swara Bhaskar, Richa Chadha, Mika Singh, and others united to support the singer after a Twitterati claimed that it took a Punjabi star to take a stand while Bollywood preferred to stay mum during these past tumultuous months.

Meanwhile, on Saturday, the central government failed to break a deadlock with the thousands of farmers protesting on the outskirts of Delhi against the agricultural reforms and are set to meet again on Wednesday, reported NDTV.

Director told Priyanka Chopra 'panties should be seen', visited her ...