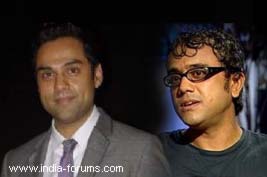 Dibakar Banerjee's 'Shanghai' was set for a Jan 26 release, but the filmmaker has decided to delay the event and shoot extra scenes with actor Abhay Deol.

Banerjee saw the wisdom of revising his narration, and that too quite radically.

'It is not just cosmetic additions to the screenplay. The extra shooting considerably alters the mood and the content of the narrative,' said Banerjee.

Isn't it an unusual practice?

The director expressed surprise: 'But I've done it in the past as well! Finished a film and then revised and added footage to the narration. After completing the entire shooting and post-production of 'Oye Lucky! Lucky Oye!', I had summoned Abhay again and shot extra scenes.'

'I've done the same again this time. You see, sometimes after you think you've completed your film and you look at it in totality, you find you've missed out on something vital.'

Banerjee admits the additional footage for 'Shanghai' would entail extra expenditure and a delay in release.

'We will miss our January 26 release. But that's okay. The important thing is to take every film as close to what you had envisaged it in your mind rather than be blindly true to your screenplay and put a lid on the project even if it looks unfinished to you,' he said.

'Shanghai' also features Emraan Hashmi and Kalki Koechlin. The political thriller has been inspired by a mid-1960s book, 'Z', by Greek writer and diplomat Vassilis Vassilikos, and talks about the common man's revenge from the rich and powerful section of the society.