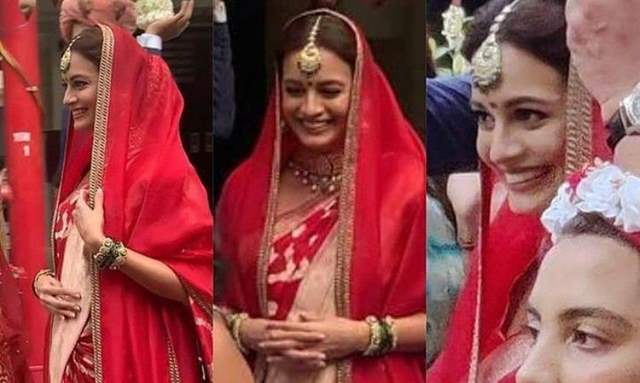 The wait is finally over as the first pictures from Dia Mirza and Vaibhav Rekhi’s wedding have surfaced on the Internet. Here is the first glimpse of the actress as she decks up in a traditional red attire for her big day. Dia and Vaibhav will tie the knot today, on February 15, 2021.

Dia makes for the most beautiful bride in this first picture from her wedding. She can be seen wearing a red saree and chunari, accessorized with a heavy necklace and maang tikka. She flashes her million-dollar smile as she beams with joy ahead of her wedding.

In this new picture from the ceremony, Dia and Vaibhav can be seen sitting together and doing the rituals in the garden area. The residence has been decorated with stunning decor of flowers and lights.

Previously, a source close to Dia had informed that only 50 guests have been invited for the wedding, keeping in accordance with the COVID-19 regulations. Earlier in the day, actress Aditi Rao Hydari was spotted arriving at the venue.

Dia Mirza was previously married to Sahil Sangha hut announced her separation in 2019. After 11 years of marriage, the couple had filed for divorce and parted ways. In a joint statement, the duo had stated that it's a mutual decision to get separated but they will continue to remain friends and be there for each other.

Here's wishing many congratulations to Dia Mirza and Vaibhav Rekhi on their wedding and new beginnings!