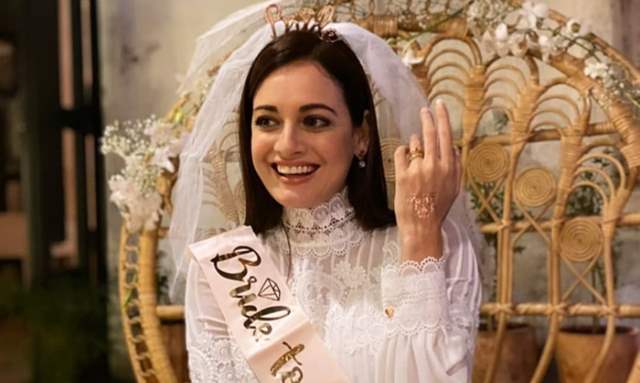 The day is here! Bollywood actress Dia Mirza is all set to turn bride to boyfriend Vaibhav Rekhi today, on February 15, 2021. Vaibhav is a Mumbai based businessman and the duo will tie the knot today in an intimate, traditional ceremony.

Ahead of the wedding, pictures from Dia Mirza’s pre-bridal shower have gone viral on the Internet. The actress looks like a vision in white as she happily poses with a ‘bride’ crown on her head. The pictures are shared by her friends, who attended the party on Sunday.

On Sunday, Dia attended the party with her close friends and soon to be husband, Vaibhav Rekhi. Pooja Dadlani, manager of Shah Rukh Khan and a close friend of Vaibhav, welcomed Dia into the family by sharing pictures of the happy couple, and wrote, "Welcome to our crazy family @diamirzaofficial.. we all love you."

The wedding preparations have started in full swing. Just a while back, the actress also gave a sneak peek of her mehendi as she dropped a picture on her Instagram story.

Dia Mirza was previously married to Sahil Sangha hut announced her separation in 2019. After 11 years of marriage, the couple had filed for divorce and parted ways. In a joint statement, the duo had stated that it's a mutual decision to get separated but they will continue to remain friends and be there for each other.