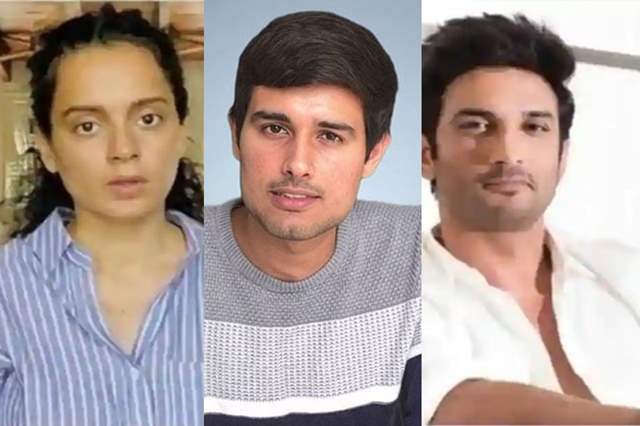 The Sushant Singh Rajput saga may have witnesses its own journey over all these months but there are several other people who have been directly or indirectly attached to it, at times even not wanting to be.

Rather unprecedented, YouTuber Dhruv Rathee, who have over 4 million subscribers on his channel went on to slam a tweet by a user who accused a 'major YouTuber' of making a video on Kangana Ranaut and Sushant Singh Rajput's family. According to Twitter user Eray Cather, a major YouTuber has been paid a whopping Rs 65 lakhs to make a video to expose the late actor's family's role in his demise.

Cather tweeted, "ATTENTION: A major YouTuber with more than 4m subscribers has just been paid 65 lac Rs to make an analytical video "exposing role of SSR's family in his death". Deadline given to him is 1-2 weeks. The same YouTuber was earlier hired to target Kangana & Arnab."

He added, "His usual fee is 30-40 lac Rs per video. For Kangana and Arnab he was paid 35 lac Rs for each video. More details awaited." While Cather did not name anyone in his tweet, YouTuber Dhruv Rathee responded to Cather's accusations and called it 'fake news'.

He replied, "Lol, is this bullshit fake news referring to me? First of all no one paid me any money to  make Kangana video. Secondly, I’m not planning to make any video on SSR. And thirdly, I really wish my sponsoring fees was 30 Lakh per video, how rich would I be." To this Cather responded, "One: I've not named anyone. If you feel it's you, you're welcome. Two: About your fees & deals, @dhruv_rathee — I will definitely talk about it, but my focus is not that as of now. So wait for a while. Three: Am glad you dropped the vid, or not planning now. You answered it."