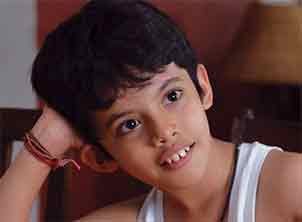 Actor Darsheel Safary, who made his cinematic debut with superstar Aamir Khan's "Taare Zameen Par", is certain that the latter's forthcoming movie "Dhoom 3" will be great.

"'Dhoom 3' will be awesome. He (Aamir) will play a villain for the first time. That's exciting. He looks good in the film," said Darsheel.

He believes he has become "less mischievous and more serious". The teenager has also acted in "Midnight's Children", "Zokkomon" and "Bumm Bumm Bole".

"I am still in touch with him. We speak on our birthdays. Even before boards he had called me up and said, 'Study hard and forget about everything else for now'. Anything special comes we speak. I consult him before any project," he said.

Darsheel has no work assignments at the moment, but is busy with his education.

"I am not doing anything right now except concentrating on my studies. I've finished directing a short movie for a college competition. I am directing for the first time. I've to edit also, so I am learning a lot. But acting is my passion," said the actor, who wants to pursue a degree in mass media.

"I enjoy film festivals. I also wanted to watch 'Arjun', but my stay here is less than 24 hours. For hosting, I had to work on the lines a lot because I find it difficult to switch from Hindi to English. It came out pretty well though," said Darsheel, who wore trousers with a Nehru coat gifted by his father.