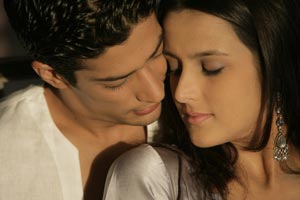 Pooja Bhatt has chosen a sensitive subject in her third outing as a director. ‘Dhokha’ is from the point of view of the minority community in our country and how injustice and neglect has lead many amongst the community towards terrorism. The good news is that by remaining unbiased and not exactly taking sides, the film succeeds is getting its message across and kind of pulls it off. ‘Dhokha’ is far better than Pooja’s earlier films ‘Paap’ and ‘Holiday’. Looks like Pooja scores more with an original script (quite true to real life), than adapted ones (like the previous two)!

Zaid Ahmed Khan (Muzamil Ibrahim) an honest officer in the Mumbai police force has the perfect life- a satisfying job, a beautiful, homely wife Sarah (Tulip Joshi) by his side. Until his world falls apart one fine evening after a major bomb blast in the city. He gets the shock of his life when he finds that his wife is amongst the dead. He realizes that his perfect world was actually a sham when the police accuse Sarah of not being a mere victim but the perpetrator of the crime. He is suspended from his job and things get worse when he comes to know that Sarah has been rightly accused, she was the suicide bomber. Gaining back the chief of the ATS squad’s confidence (played By Gulshan Grover) who initially grills him; he succeeds in getting to the bottom of the issue, the reasons that led Sarah to do something as unimaginably destructive as this

The film does get preachy at times. And knowing the kind of subject the film is dealing with beforehand (as it has already been publicized so), some portions of the film do look predictable. One strange thing was Muzamil’s character taking a long break before cremating his beloved. The Aushima Sahwney track seems to be there just for the heck of it. Neither does her character feel too much sympathy for the dead wife, nor does she support the hero fully or in the end up with him (though it seems she intends that).The track has no culmination and same goes for Muzamil’s two friends as they behave in a rather confused matter (one out of the blue criticizing him too much). They both disappear mid day through the film. However the turning point(why Tulip became so) is convincing. Another good thing is the fact that the film is around two hours long and is not too long or dragging.

Mahesh Bhatt has mostly made new comers act and turned many into stars. Looks like Pooja Bhatt excels in the department too. Muzamil Ibrahim has done justice to the role. He looks dashing and if all goes well for him he could be a star, the next big model turned actor. It was a complex role and he had to convey the anguish and trauma of a man betrayed by someone he thought was closest to him in a subdued manner and for a new comer he has performed really well. On most occasions he has looked convincing. Tulip Joshi is a revelation and suits the role to it. She has never looked so better in any of her movies (especially with nude make up). She has very few dialogues in the film but says it all with her expressions.

Aushima Shawney who plays Muzamil’s ex girlfriend turned support system through the crisis doesn’t perform badly nor does she look bad (though Tulip scores over her in the looks department). But as said earlier the problem is, at most points there is confusion as to why she is there. Gulshan Grover has picked up a completely different persona as the ATS chief and tries well enough. But it gets a little awkward to see him like that. Ashutosh Rana is pure evil just as the character demands.

Anupam Kher as usual is efficient. Pooja’s hubby Munish Makhija makes an appearance towards the end as the brain behind all terrorist activities and is fairly okay. Another newcomer Abhay Sachar who plays Tulip’s brother is convincing.

Music is okay and so is the camera work. To sum up, ‘Dhokha’ is an honest effort which sends across a message and should find its loyal set of audience.