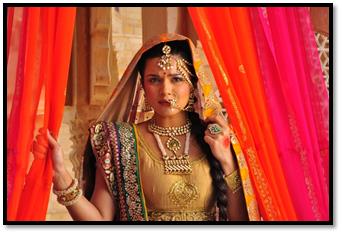 Bairam's attempt to kill Pratap goes in vain; Pratap (Faisal I Khan) lets Bairam Khan live as his punishment. Dai Kokoi goes to Surtan in place of Dheerbai (Aashka Goradia) & tries to kill Surtan but in the nick of time Surtan notices this & kills Dai Kokoi.

On the other hand Udai Singh (Shakti Anand) gets the hold of Rao Surtan and takes him along. Pratap is on his way back to Mewar. Rao Surtan is lying in coffin and struggling for his life but Udai Singh and all bury him alive. We see all the queens are standing in front of portrait of Dai Kokoi and mourning her death. On the other hand celebration starts for Pratap and Udai singh's welcome. Udai singh gets to know that Dheerbai's deeds that Rao Surtan was unknowingly informed by her.

And he decides to punish and gives death sentence to Dheerbai which shocks everyone including Pratap. On the other hand Maharani Jaivantabai (Rajshri Thakur Vaidya) tries to console Dheerbai but she blames Jaivantabai and insults her. Pratap can't take this punishment given to Dheerbai and decides to talk to Udai Singh to forgive her.

On the other hand Dheerbai tries to seduce Udai Singh in order to escape from her punishment but Udai Singh traps her and give her the punishment to live like a widow in prison.. Everyone is shocked. Rao Surtan running hard and finds a place to rest where he finds himself a place to sleep, there he gets shock to see Bairam khan sleeping on the same place...

7 years ago Ya...so happy DB deserves this.. love Ranapratap.. & all ...waiting for tonight.

7 years ago So Happy Now dheerbai deserves it.. waiting for... Thanks T.B.///

+ 5
7 years ago Yes...yes...finally she deserves more punishment. I still can't believe Thanks TB