View Profile
The spunky and full of laughter Dhairya, fondly known as Harry Putter on Kya Aap Panchvi Pass Se Tez Hai, broke down into tears on the sets of Zee TV's Tata Indicom Chota Packet Bada Dhamaka. The little boy was offended by the judges' comments about his performance. 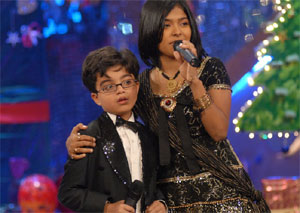 Featured Video
The 7 year old boy, who captured the hearts of the audience, was too overwhelmed on hearing the judges' negative comments. Dhairya's mother was equally upset as she comments, "Meri bachche ki umeed toot gayi hai." But it wasn't just the judges' comments that brought the boy to tears, but his partner, Smita Nandi's, mother too, when she called him a poor performer and that he was ruining her daughter's chances of winning the competition.

Annotating on the entire incident, Rakhi says, I was very upset with Smita's mother's behaviour. She has no right to comment on someone's performance in such a harsh way. There is no age between the two and one needs to keep cognizance of this." Kunal tried to pacify Dhairya and his mother, both of whom were visibly upset with the comments. But to no avail. Only after quite some cajoling and hugs from the judges, did the boy regain his composure.

Such behavior compels us to rethink the decision of having kids participate in reality shows and undergo so much pain and heartache. Is it worth making such adorable kids feel so hopeless and small? It is definitely something to think about.

cute_harshita 14 years ago he is reallly sweeeet


bt this i sreally sad

+ 4
14 years ago So sad..He's a kid
They are very sensitive
And its good to be honest n all
Par being harsh..Is going a bit too far
Its a show..they are there to have fun
Aur display their talent..Not to be ridiculed

14 years ago aww poor dhariya!
he did not deserve that treatment!

14 years ago oh poor dhiriya, how dare they mk a little cry!! such ppl do not deserve to live in this world n sould b hanged!!!!! Poor Dhiriya, i feel soo sad for him!!!

14 years ago I wanaa kill all these people who made pyara dhairya cry...

+ 2
14 years ago poor dhairya , they should do something with her mother she don't have any rights to say this oh shit ...

+ 6
14 years ago This judges & Smita's mother was so rude on this cute lil kid!Arggh!how can b they so mean?If Smita's mother was not fond od Drariya then y she agreed to pair Smita wid him..This ppl na..That poor lil sweet boy..Feling bad 4him..

pepsi 14 years ago Poor kid. I will be sure not to support Smita in any show in future because of her mother's harsh words towards such a cute adorable kid.