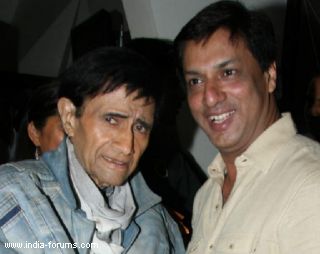 Optimistic, strong and passionate - that's how filmmaker Madhur Bhandarkar remembers the evergreen Dev Anand, who passed away in London following a cardiac arrest.

'The news of his death has just shocked us. I have been an ardent, a hardcore Dev Anand fan and it is really sad to know about his demise,' Bhandarkar, who met the veteran at his last birthday Sep 26, told IANS.

'A common friend had thrown a party for him, and he was so full of life. He was ageless, so vibrant and was happily posing for pictures. It was always a pleasure meeting him,' he said.

The National award-winning filmmaker recalls a recent event where he saw Dev Anand's 'Guide' with the star himself.

'I sat with him and saw the film. I almost felt like a little child...Dev saab will continue to inspire me,' said Bhandarkar, whose lists 'Jewel Thief', 'Kala Baazar' and 'Hare Rama Hare Krishna' as his favourite Dev Anand films.

Bhandarkar, known for distinct films like 'Chandni Bar', 'Fashion' and 'Jail', says the most inspiring aspect of Dev Anand's life was his nonchalance to criticism.

'He was so passionate about whatever films he made, and he used to be always in high spirits whether or not his films were working. His spirit never dampened. He used to work for 16 hours a day in his prime, and he had always been so optimistic about his work,' he said.

He even shared how Dev Anand 'encouraged' him to stick to his different zone of filmmaking.

People would come up to me and say 'Mere Sarr se mera shani hata do': ...

Deepika Reveals Startling Facts: Dropped Out of her College; Academics ...