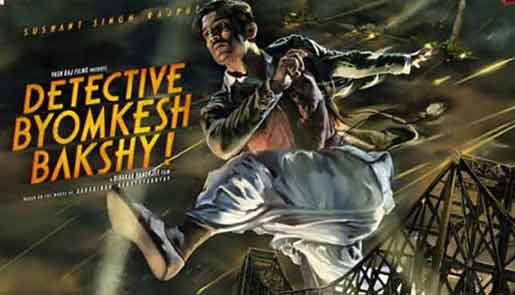 Kolkata's iconic Howrah Bridge, which was commissioned 72 years ago Feb 3, witnessed a unique tribute on its birthday Tuesday with a flash mob act by 50 dancers on a "Detective Byomkesh Bakshy!" (DBB) soundtrack.

"On the occasion of Howrah Bridge's birthday today, 50 dancers did a flash mob at the Howrah Bridge on the film sound track 'Calcutta Kiss' wishing a Happy Birthday to the Bridge early in the morning. The dancers shook a leg on the song from the film," read a statement.

Commissioned in 1943, it was a replacement of the pontoon bridge linking Kolkata and Howrah, over the river Hooghly. It was the fourth longest cantilever suspension bridge in the world at the time.

It stretches for 2,150 feet and rises up to 280 feet from its foundation and ranks as the sixth longest bridge in the world now.

It can also be seen on the poster of "Detective Byomkesh Bakshy!".

"The bridge is a very important element in the film and it was also seen in the poster image. And Byomkesh Bakshy being the most iconic character of Calcutta, he wished the bridge a very Happy Birthday.

"The Bridge was constructed on Feb 3, 1943 and was never inaugurated due to security issues as the Japanese were on an aerial attack. 'Detective Byomkesh Bakshy!' is set in the same time zone as the birth of Howrah Bridge and the team was keen to honour the bridge in their way," the statement read further.

Directed by Dibakar Banerjee, "Detective Byomkesh Bakshy" stars Sushant Singh Rajput in the lead role and it is slated to release April 3, 2015.