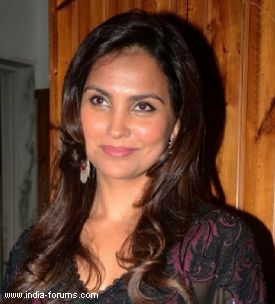 After spending a decade in front of the camera, Lara Dutta has taken a break from acting and is putting her designing skills to test by launching her sari collections.

The former Miss Universe, seen in hits like "No Entry" and "Partner", is a mother of about two-year-old Saira, but says designing is her "new baby".

"I have done films for 10 years. This (designing) is something new that I have forayed into; so it's my new baby. I am excited about the response from the customers," Lara told IANS. She was in the captial to launch her second sari range in association with Chhabra 555.

The 35-year-old started designing last year when she created a whole line of saris for women who are keen to strike the right balance between traditionalism and modernity.

"The second collection is far more traditional. Personally I am a big fan of Benarasi saris and many other old-age fabrics; so I wanted to make those weaves younger and contemporary. Normally, we associate Benarasi saris with our aunts and our mothers, but I wanted to give it a younger and trendy feel," she said.

The model-turned-actress, who won the Miss Universe title in 2000, made her Bollywood debut in 2003 with "Andaaz" and went on to do films like "Masti", "Housefull" and "Don 2".

Post-motherhood, Lara's silver screen appearances have not been frequent, but she has no regrets.

"I think each thing has its own space in life. I enjoyed being busy. My priority (now) is my daughter. That will always be my number one priority. Now she is getting older, so I am getting more time to celebrate and concentrate on my own work; so here I am promoting the brand as much as possible," she said.

"Motherhood is the reason why I am seen very less on the big screen. But I feel that the film has to be really good for me to leave Saira at home and get back on the film set. I would rather spend that time and energy on doing something that will benefit me in the long run," said the actress, who looked stunning in an elegant sari.

Lara is currently working on a few scripts, of which one will be made under her banner.

"At this point of time, I am looking at a few projects - one with my production house and one outside of it. So I am going back to the work. I am doing pre-production for the 'Chalo Dilli' sequel and that's happening again with Vinay Pathak and me. That will go on floors in March next year."

How does it feel to be called a fit mom in the industry?

"I think today every mom - whether it is Karisma (Kapoor), Shilpa (Shetty) or anyone - wouldn't want to look fat after giving birth to a baby. They are all fit; so I have done nothing great.

"Every woman has become a multi-tasker and that keeps all of us fit. I think it's a normal transition. You put on weight and then you lose it," she said.

Delnaaz Irani speaks about entering Choti Sarrdarrni, her ...
27 minutes ago

Madhrima Tulli & Ssharad Malhotra starrer “Pasta” gets an ...
46 minutes ago