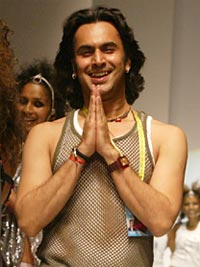 'Though there are three most beautiful girls in the film, Ranbir simply rocks in the film - be it the music video or the 'Khuda Jaane' song,' Narula told IANS in an interview.

He said all the three women - Bipasha Basu, Deepika Padukone and Minissha Lamba - are fabulous, but Ranbir exudes a special charm.

So what is so special about Ranbir's outfits in the film?

'Ranbir's dresses and looks change with time and have been worked upon a lot. He can be seen trying all sorts of clothes that one can expect a guy from the age of 19 to 30 to wear.'

Designing for Ranbir might have been great, but draping the three heroines in his creations was also a wonderful experience, Narula said.

'Styling was very exciting and challenging as all three actresses are of different types and come at different times in Ranbir's life. So the styling had to be unique for everyone with no overlapping. But one thing I can assure you - all the looks would be unique and will have an Aki stamp on it.'

Each actress makes a style statement in the film, claims the designer.

'Minissha plays a small town girl from Amritsar. So I kept in mind the influences on fashion in Amritsar. Her look in the film with the Patiala salwars, ganjee tops and jackets have already become a rage,' Narula said.

Bipasha is a young, contemporary girl from a big city. 'She is the most fashionable girl from a metro with all the latest trends in fashion. She can be seen wearing shorts, jeans and other trendy dresses,' he revealed.

Asked how it was designing for the dusky beauty, he said: 'There is always a bonus if we have an actress like Bipasha in the film. She is one of the best looking women with great attitude and an amazing body. And her fashion background does makes a difference.'

Deepika, who made her debut in 'Om Shanti Om' with a double role, is an NRI in 'Bachna Ae Haseeno'.

'Her clothes are very functional. It's shirts, high-waist skinny jeans, white-legged jeans and has a tough look. Deepika's skinny jeans are the hottest thing right now.'

'Siddharth Anand (the director) asked me to keep the look of the film young, trendy and vibrant. He said it has to be a hip, hot and sexy looking film which it has finally turned out to be,' Narula added.

Narula has designed clothes for top Bollywood stars like Rani Mukerji, Preity Zinta and Priyanka Chopra, but he says that Kareena Kapoor can easily be called the most stylish of them all.

'Kareena has a fantastic sense of attitude and style and she can carry off anything in the world.

'She is fabulous in any costume she wears - be it saris, shorts or any other amazing dress.'