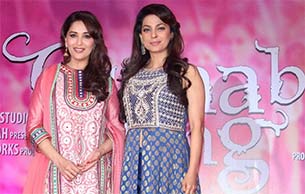 Justice Sanjeev Sachdeva stayed the release of the film, starring Madhuri Dixit and Juhi Chawla, saying that if it is allowed to be released, it will cause irreparable damage to Sampat Pal's reputation. The film was set for release March 7.

"Reputation once lost is lost forever and cannot come back and even can't be compensated in monetary terms," the court said.

Sampat Pal moved the high court seeking a restraining order on the release of "Gulaab Gang", saying the filmmakers did not take her permission before making the movie, which shows her in bad light.

She alleged that the lead actress playing her character was shown in bad light in the promos of the film, which will thus affect her reputation. She further contended that promos of the film depicts her as an anti-social element of the society contrary to her real life.

The movie is directed by debutant Soumik Sen and produced by Anubhav Sinha.

The court accepted the contentions of Pal that movie "Gulaab Gang" is the adaptation of her life. The lawyer representing Pal told the court that name of the film is identical to the organisation "Gulaabi Gang" started by her.

The court also noted that movie has similarity with the life of Pal.

"The plaintiff (Pal) has certainly a prima facie case. It clearly indicates that the movie is based on her and her organisation. There is similarity in name, the character played by lead actress, women wearing pink saris and carrying lathis depicts that film 'Gulaab Gang' is adaptation of her life," said the court.

"In case interim injunction (stay on release of film) is not granted and (producers) allowed to release the film, plaintiff (Pal) would suffer irreparable loss to her reputation. In my view, plaintiff has made a case of an interim injunction. The defendant (production house) is restrained from promoting/releasing the film 'Gulaab Gang' in Delhi and India," said the court.

The court was earlier reluctant to stay the release of movie saying Pal approached the court at the last minute and she should have sought the relief earlier.

During the hearing, counsel appearing for the production house suggested that they will run a scroll that the movie is not based on Sampat Pal, but Pal's counsel refused to accept the compromise.

The movie makers maintain that the film is not based on Sampat Pal's life.