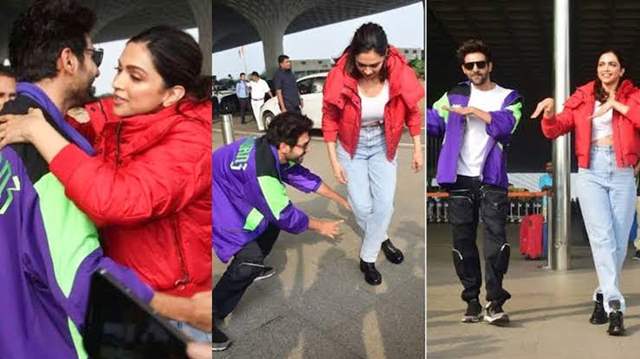 If there’s one man who owned 2019 like no one’s business, it’s Kartik Aaryan. The actor hit bull’s eye at the box-office with Luka Chuppi and Pati Patni Aur Woh. Throughout the year, he even drove the internet crazy with his poses, signature hairstyle and but obvious his lit dance moves. Not just the netizens and his fans, even celebrities couldn’t control and took the dance challenges that Kartik Aaryan posed to the world. The heartthrob’s songs kept us grooving throughout the year and which even made tinsel town’s divas and divos shake a leg to his tunes. The Dheeme Dheeme (PPAW) dance challenge took the nation by storm and almost everyone learnt the signature step.

Here are 5 celebrities who put their dance shoes on and grooved a la Kartik Aaryan style:

Deepika Padukone is one helluva dancer in our industry. She can spin multiple times for a traditional ghoomar song (Padmaavat) and she can also set our screens on fire with her scintillating moves being Lovely (Happy New Year). No wonder, Queen bee got curious when Kartik’s song and dance moves were trending on social media. She immediately took to her Instagram and openly asked Kartik, to teach her the signature steps as she wanted to be a part of Dheeme Dheeme dance challenge. What’s more, the actress and the hunk met up outside the Mumbai International Airport and Kartik showed her how to effortlessly do the Chintu Tyagi steps to the song. Deepika thoroughly enjoyed the moment and was pleased to dance with Aaryan. Next, we even hear that Deepika and Kartik, yet again danced to the song at an award function. We hope our filmmakers are watching this… we want them to be on the big screen. Pronto!

When the God of dance, wants to do a particular step and asks you to dance with him, it’s a BIG thing! Hrithik Roshan at an award function recently asked Kartik Aaryan to join him on stage and teach him the Dheeme Dheeme steps. Videos went viral on the internet when Hrithik was doing the signature steps with Kartik Aaryan and the two hottest men on this planet, were grooving to the song. Forget setting the stage on fire, the two dashing men are to be blamed for global warming. We still can’t get over that moment.

Salman Khan might not be the best dancer in B-town, but his signature moves in all his songs become the dance step of the year. When Kartik Aaryan was present on a reality show to promote PPAW, which is hosted by Salman Khan, the two set the house on fire with their candidness. And after all the laughter, bromance and games, Salman Khan sportingly took up the Dheeme Dheeme dance challenge and tried to do the signature steps with the young actor. That was quite a treat for the audience.

The brave Laxmi Agarwal couldn’t resist to the charm of Dheeme Dheeme tune and took to her Tik Tok account and danced to the song. Laxmi Agarwal’s short video on the chartbuster and her aping those moves is too cute. She even put it out on her social media and Kartik Aaryan soon reposted it and even said that he's a big fan of hers. Now this social media friendship, always gets us excited.

In the beginning of 2019, when Kartik gave us the family entertainer Luka Chuppi, the actor surprised his fans with the new version of ‘90s hit song – Poster Lagva Do. The actor stepped into Akshay Kumar’s dancing shoes and gave us a hit party number. But fans got a double scoop of surprise when Akshay Kumar took to social media and grooved to the number along with Kartik and Kriti Sanon. Kartik has always been vocal that he has been a huge fan of Khiladi Kumar, and when he got the chance to dance with him on his song, it was surely a memorable moment for the hunk. Now when there is Akshay Kumar and Kartik Aaryan dancing together, it becomes impossible to decide who does it better. Isn’t it?

Salman feels that everyone is conspiring against him: Hrithik reveals ...

Deepika Singh opens up on being Body Shamed post son's ...
9 minutes ago

Re-entry of This character in Mere Sai!
26 minutes ago

Rubina Dilaik On Participating in Nach Baliye 10 With ...
33 minutes ago

Katrina Kaif Turns Messiah For 100 Background Dancers, ...
an hour ago

From warm water to citrus fruits: Celebs share tips to boost ...
2 hours ago