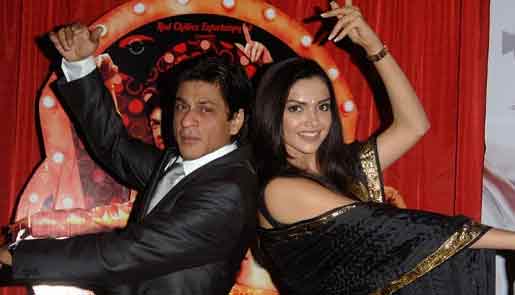 Shah Rukh Khan, the producer and hero of Deepika Padukone's debut film "Om Shanti Om", says she has paved the way for her own success and that she always had it in her to be a "star".

SRK and Deepika worked under Farah Khan's direction for "Om Shanti Om", and the team has joined hands again for the forthcoming "Happy New Year". In the gap of seven years, Deepika has established herself as one of the reigning beauties in Bollywood -- and Shah Rukh feels the success is "all hers".

"I have nothing to do with her (Deepika's) success. It's all hers. You can't take credit away from someone," Shah Rukh told reporters in a group interview.

Citing his own example, he said that when he worked on his debut film "Deewana(1992)", veteran actors like Rishi Kapoor and Amrish Puri were very nice and kind to him.

"I must have made mistakes, I must have been good and bad," Shah Rukh said as he mulled over his own journey.

But then talking of Deepika, he said: "I think Deepika was always a star. Since she was new, we did the 'Aankhon mein teri' song and we showed it to Amitji (Amitabh Bachchan). He said, 'She is a very huge star'. She was a supermodel at that time, so it's not something we (Farah and I) have done.

"I haven't worked with her for seven years, but I think she has it all. As a friend, I told her that 'Always do a film where you feel comfortable with the people around'. She has made wonderful choices -- whether it's 'Cocktail' or 'Finding Fanny'.

"She has chosen some highly commercial films too; she has made the right choices," he said.