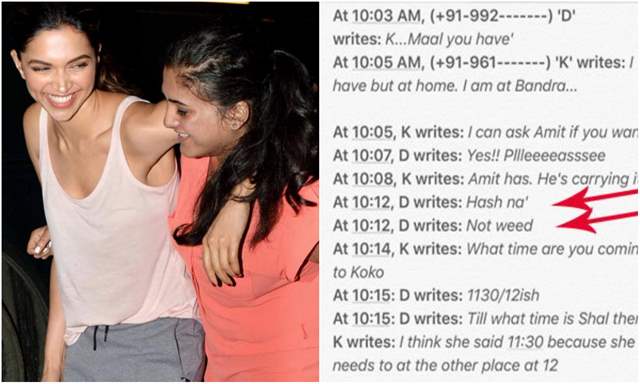 Deepika landed back in Mumbai from Goa, where she was shooting for Shakun Batra's next project. The actress arrived at the NCB guesthouse straight from Taj Hotel in Mumbai in a SUV car to dodge the media.

During the probe, Deepika was questioned regarding the WhatsApp chats exchanged between her and her manager Karishma Prakash in 2017, allegedly discussing drugs "maal."

Karishma Prakash, Deepika's talent manager was also summoned by the NCB today. Deepika and Karishma were questioned together by a 5 member panel, during which the actress admitted to the drug chats.She was also asked to keep her phone outside before her interrogation started.

As per Times Now, Deepika has accepted to the drug chats with her manager Karishma and admitted that the messages were sent by her.

Reportedly, the second round of investigation will take place in sometime where the NCB will question the duo about the party at KOKO club, as mentioned in the chats.

Meanwhile, Sara Ali Khan and Shraddha Kapoor have also appeared before the NCB, in connection to the drug case. While Shraddha's name cropped up after WhastApp chats with Jaya Saha allegedly discussing CBD oil came out in public, Sara Ali Khan was allegedly named by Rhea Chakraborty, who has been arrested by the NCB.

Deepika Padukone Arrives at NCB, to be Questioned over Alleged Drug ...