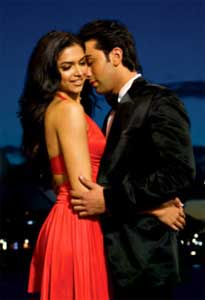 Hold your breaths one and all - for the stunning beauty Deepika is all set, yet again, to romance her ex, the very handsome Ranbir Kapoor!


If buzz is to be believed, it is indeed the case. For Deepika has been considering signing the contract with Anurag Basu for his next in line, Khamoshi, where she will be paired  opposite Ranbir.


We had previously heard of these two ex lovers publicly showing interest in sharing a project once more. All remained but gossip doing circles, until we heard of this concrete something! And now it seems, more than ever, that the claims of the two young actors were not for the heck!


The film, it is also heard, was offered to Katrina Kaif initially, but due to Priyanka's inclusion in the cast, Brit babe Kat chose to opt out. Fortunate it must have been, for the next approached was Deepika Padukone, a confirming call from whom is awaited.


Sources close to the actors claim that the news is in fact true, that when Deepika learned of Ranbir playing the male lead she was only mildly surprised. In fact she is said to be looking at the script very professionally, keeping her personal differences with the actor at bay.


A final meeting with director Basu shall seal the deal - until then, let's keep our fingers crossed for the best!

Deepika Padukone continues to win hearts as she emerges winner in the ...

Deepika Padukone is eager to star in Hollywood films? Signs up with ...