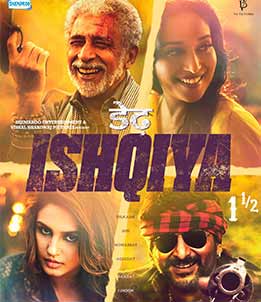 A gripping storyline, strong cast and dialogues laced with Urdu seem to have worked in favour of "Dedh Ishqiya" in Pakistan. Distributor Rehmat Fazli of Geo TV said the film is doing well despite a "haphazard release" and added that late night shows are running housefull too.

The film hit the screens Friday.

"We got the prints only by Friday afternoon and the censor board gave us the certificate by seven in the evening. The theatres were not sure if they will even get to show the film, so there were no posters," Fazli told IANS on phone from Karachi.

In Pakistan, the film is being shown on 35 screens, including single screens. However, the footfall in multiplexes is overwhelming compared to the single screen theatres, said Fazli.

"During weekend, the multiplexes were full and all shows including the night show were running housefull. However, the film did not do well in single screen theatres," he said and added that Monday and Tuesday are public holidays in the country.

If Vidya Balan surprised with her sensuous portrayal in the original, Madhuri Dixit has bowled audiences over as manipulative Begum Para in the sequel. Another talented actress Huma Qureshi joins her in the cast.

The makers are "thrilled" with the rave reviews and viewers' response to "Dedh Ishqiya" in Pakistan, where it released on the same day as India.

"We went through the necessary approvals of getting clearance from the regulatory bodies and censor board," said Hiren Gada, director Shemaroo Entertainment Ltd, on the Pakistan release. He has co-produced the film with filmmaker Vishal Bhardwaj.

"There were challenges. However, we had very good support from our local distributor in Pakistan. We are thrilled with the response in Pakistan, even shows at 1.30 a.m. are going housefull," he told IANS.

Gada says they were confident about the film's performance in Pakistan.

"The 'Ishqiya' franchise is based on Khalujaan and Babban's naughty and quirky chemistry and the bold female characters. Hence, we were confident of its success," he said.

"Indian cinema is popular in Pakistan and the audiences look forward to watching Bollywood films, since the cultures are similar. We think that good films will have a good market there," he added.

They are hoping to earn good profit in the neighbouring country.

"It is too early to talk about the collection figures yet. However, going by the tremendous response, we are hoping that it will do extremely good business in the territory," he said.

Gada feels that it is the mix of the "twists and turns", "content" and "story" that made the film appealing.

"'Dedh Ishqiya' is an extremely entertaining and funny film, laced with twists and turns. This is the key factor drawing audiences to see the film. In addition to this, the content, story, treatment and the entire packaging connected with the audience," he said.

Madhuri, who made a comeback after seven years with the film, did help in luring the audiences as well, he said. The 46-year-old made a fabulous 'begum' in the movie.

"Certainly it has generated excitement, curiosity and buzz around the film," he said.