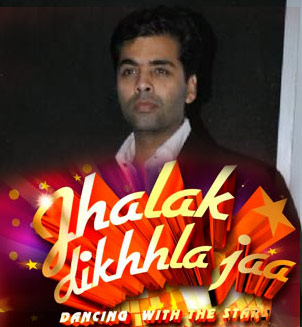 Filmmaker Karan Johar, who will be one of the judges in the fifth season of the dance reality show "Jhalak Dikhhla Jaa", says although he is not a dancer, his experience behind the screen has made him understand what dance is all about.

"One of the large parts of filmmaking is song and dance in India. I have shot about 50 songs, lavishly. Dance is a big part of our cinema. It is not about the finer nuance and the grammar of dance, it's about the energy and passion you bring to your performance," the 40-year-old said here at the launch of the new edition Thursday.

Karan will be joined by dancing diva Madhuri Dixit and choreographer Remo D'Souza on the judges panel.

"While Remo is the master of his craft and Madhuri is a master executor, I think I will just talk about the concept and the energy that the performing artists bring to the table. So it's not about 'begaani shaadi mein abdullah deewana', this abdullah is no deewana, trust me," he added.

Meanwhile, Karan also stated that he has strict instructions from his mother, Hiroo Johar, against dancing.

"I have been instructed by my mother that she will not allow me to enter the home if I dance on the show. So at the risk of losing my home, house and my next meal, I may have to stop and bind my feet together and I request Madhuri and Remo to just pull me down everytime I want to dance," said Karan.

_wallflower_ 8 years ago give your best shot GURMEET ...

love u loads... u rockkk

Priyasi 8 years ago Watching JDJ only for GURMEET. He is AWESOME

Abby-GC-Crazy 8 years ago m soo happy that Gurmeet is shaking his legs in JDJ...
we fans get to see him 7 days a week now... lolzzz..
n he gets to learn to dance better..
deadly combo... hhhehehe

leenarana42 8 years ago GC only few hours are left. Be positive your hardwork will reap fruit.
You are fantastically fantastic in Jhalak Promo.

pinina25 8 years ago all the best prince Gurmeet ... take care of u

EternalMaaneet 8 years ago Gurmeet you are the best my jaan! You will surely make it to the top with shampa! Love you so much my prince charming.. :)

shansuk 8 years ago I like u very much. U are very handsome.yesterday episod was very nice. ur expression was live full.I am happy with ur acting keep it up. Have a nice day.


You have the qualitiy to attract audians towards u.

Vishal Bhardwaj on How People are Trying To Malign Bollywood ...
16 minutes ago

Sunny Deol To Make a Netflix Project With Son Karan Deol?
18 minutes ago