After giving the box-office hit film Dabangg, Sonakshi Sinha is back once again to steal hearts. This time, she will be seen spreading her magic in a film opposite Akshay Kumar in Shirish Kunder's 3-D film Joker. 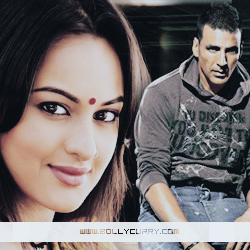 In the film, Sonakshi will be essaying a modern day girl. This was one of the main reasons as to why Sonakshi was chosen for the lead role, because apparently she fits the character to perfection. Also, since she's new in the industry and hasn't worked with many actors yet, her pairing with Akshay will be new and something fresh for the audiences!
The supporting cast of Joker seems to consist of many actors, however the names haven't been announced just yet.
Since this film is going to be a 3-D film, it has been rumored that experienced Hollywood technicians will be used for the film editing. However, the plan is to have only a few foreign technicians, with the majority comprising of technicians from India itself.
The film is to be co-produces by Farah Khan and Shirish's Three's Company along with Akshay's Hari Om Entertainment. The film is to make its way to theaters sometime in the month of January 2011.
For more information on the movie, watch this space!