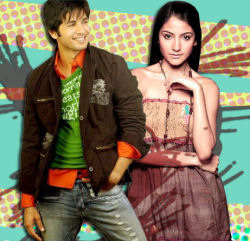 The media has not cut any slack for Shahid Kapoor and Anushka Sharma, after rumors to their alleged affair. It was a kissing dilemma, blown up by the media.


Recently, as soon as the two had signed a movie together, the press went wild. However, hopefully tabloids will try to adapt a laissez-faire attitude and let Shahid and Anushka be.

Now, aside from their upcoming YRF venture, Badmaash Company, the TV is where we'll see the "supposed" couple considering, Kapoor and Sharma have signed together to be the ambassadors of Vaseline.

With both a movie slotted and an endorsement set, Shahid and Anushka's fan bases will surely expand, which will garner more popularity and create more buzz than required.


Shahid Kapoor and Anushka Sharma's Bollywood venture, "Badmaash Company," is set to release on May 7th, 2010, in India.
10 Likes

Deepika Padukone Arrives at NCB, to be Questioned over ...
48 minutes ago