They say no opera plot can be sensible, for in-sensible situations you don't sing. These reality shows are way behind when it comes to showing sensible situations,even this week we saw very lack-luster performances in all the shows except for SRGMP. 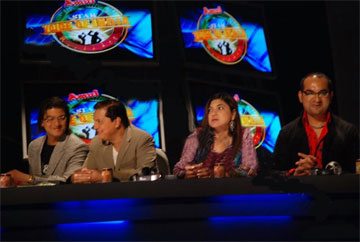 Featured Video
The judges in SVOI are somehow showing too much of disparity not just in the ratings but their own comments too. Take the genre issue in SVOI this week. In Friday's episode the judges told Aditi that she needs to sing songs from all genres but when she performed "Hari Om hari" on Saturday, they commented "Aisa gaana kyon gayaa, yeh tumhara genre nahin hai". And what to say about the comment by Abhijeet that "Wherever may be the voice - In US or Canada or any corner of the world, he will be called as Voice of India and Hindustan ki awaz.. Any Indian in any corner of the world, who sings well, will be considered Voice of India ". Abhijeetji hope you remember that just few days back, you yourself made a contradictory remark taking dig at another show on the same issue. Looks like these reality shows are now following the same pattern as the serials where they suddenly forget about a character in the story. Or is it that the judges have all now decided to "Dot" all the "t's" and "Cross" all the "i's" in their earlier statements!!! Himesh got a new fan on SVOI sets - Adesh Srivastav. This week he seemed to have had a change of mind and praised the composer's compositions. Now we don't know if that was an attempt to make up for his earlier dig at him on the "Roti" issue!! But best was to see Jatin whistling when Adesh was performing. This very whistling part was carried out in SRGMP too by Vishal, who was doing it during every good performance. 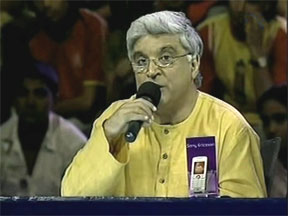 Indian Idol this week had a very average performance. It looks like contestants are concentrating more on performance than singing. Even here, the judges are showing disparity in their Judge-"Mental"-Comments. Also seems the show Director has taken some serious tuition from Big Boss makers. The voting done by the contestants themselves are being shown openly to them all leading to back biting and drama. Maybe it has been done for TRP sake, but I feel this will affect the bond of friendship the contestants share. Just hope that this new step to gain TRP's doesn't turn the show into a " Tactless-Relegated-Punching" show. 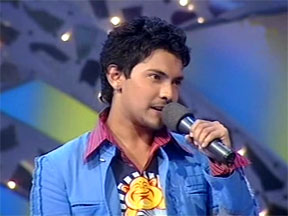 SRGMP had the Brahmastra round this week and saw some really good performances and a "Feel Good" feeling among the viewers. Yes Bappida seems to be suffereing a lot from "Abrupto-Singo-Mania" and he is found to start singing his own written four liners abruptly in the show. The other mentor Ismailji in turn seems to be suffering from "Abrupto-Stando-Mania". Zee should now seriously contemplate on putting some nice glue or seat belt on his chair as he is getting into a habit of getting up suddenly and stage a walkout. SRGMP also seems to be following the trend of not keeping to just "Heart-Touching" musical shows but also "Heart-Breaking" one. After Shekhar , now it was Aditya's turn to create some "Heartburns". Aditya getting kissed by one of the girls from the audience, which left him totally at a loss of words, must have broken millions of hearts. With the new look that Aditya is adopting, of keeping a moustach, seems now his own song "Chhota Bachcha samajh Ke" and Ismailji's comment "Bachcha Jawaan ho gaya" is finally turning to be too true. By the way what was the guest at SRGMP Sunny Deol doing? The "Punjaab Da Puttar" spent his whole time on the sets resting his head on his "Dhai Kilo Ka Haath" almost sleeping even though it was Punjabi songs round and everyone was found to be dancing there on the sets during performances!!

The legendary singer Lata Mangeshkar pointed out in an interview - "Singers dhoonde nahin jaate, mil jaate hain". In this crowd of new upcoming singers, the audiences are still confused in finding the silver lining while the controversies in the show seems to be taking the front foot.

Aditya looking hot in the pic...:$

14 years ago I totally agree that judges keeps forgetting thier own comments on previous episode. On Indian Idol or for any shows judges says that cntestant have to perform too and then in next episode they say you were off the key beacuse of your performance.They also says concentrate on your sur. What do the contestant do? Concentrate on singing or performing ? They have to win the contest and that is on the base of thier singing talent not the performance teletnt. If given chance to sing , they have to be a good singer in the recordign room not the good performer. That is so rediculous.

One more thing the way they fight is absolutely disgusting. How can you do this on national tv ? Seems like its all fixed in order to increase TRP.Whatever is that it does not look good.

reemx 14 years ago great article and part of it is true. THis is not a singing show it's more like one of those typical serials it's more to do with the judges and argument then singing.

+ 2
14 years ago yay srgmp is the best, aditya gettin kissed was soo funny, poor guy was blushin, the performances were awesome!!!. II is also v good.

14 years ago this week the performances in SVOI were really good but it puts off viewers due to the drama.... it seems that the brain behind drama was Gajji asst... the director of SRGMP now.... so he is doing good job to put drama that is required and when it is required.... lols

+ 4
14 years ago i agree the judges have been a disappointment, but still we cant overlook abhilasha's tremendous performance this week :) - she is the true star of svoi... with arindam, saptparna, harshit, toshi, priyani and prantika due to perform in the coming weeks, i feel the talent will win over drama in the coming weeks!! lets hope for the best...

+ 4
14 years ago aditya getting kissed was the best dis week..lolllllll i hate it thoo..

SVOI is too much of arguments..but aadesh was better this week..abhijeet was more into it hahah
II rocks!!1 my dentist was soo cute

14 years ago thankz...i guess lata ji is rite in a way!!
but i love to watch indian idol and SRGMP =]

+ 3
14 years ago Thanxx for your review Barnali di. It was bang on. I do think that emphasis has been stressed upon drama and TRPs race more rathan finding the one voice that would make everyone proud! Unfortunately, the ones being victimized in this dilemma are the participants. Gone are the days when singing competitions were meant for singing purposes only and were not desperate for fame and popularity..